I find that certain projects have memories knit into the fabric. For example, the scarf I'm wearing will always remind me of Simcha and how he came into our lives. It's a scarf I've knit before so it was easy to get lost in my thoughts as I knit and purled my way through the pattern as events unfolded around me. 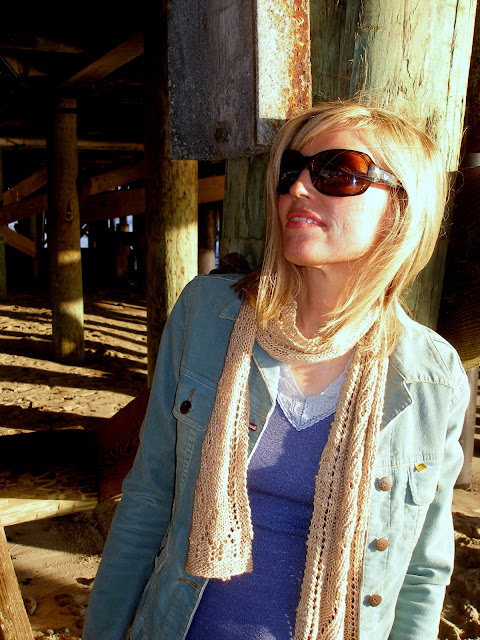 I haven't told you how Simcha came into our lives. He almost wasn't the one. Life is filled with so many "almosts". The step that you didn't take that would have taken you in a different direction.

I knit on this scarf during two flights that eventually resulted in Simcha coming home with us. As a preface, the criteria for our new puppy was primarily focused on good health as our first German Shepherd (adopted 20 years ago) had a lifetime of surgeries and health problems. Steve found a breeder in North Carolina who had healthy dogs and a new litter of "working" German Shepherd puppies. We were almost positive that one of these puppies would come home with us. We paid a non-refundable deposit, we were that sure. But we hadn't understood that difference between a working German Shepherd and a show German Shepherd until we saw the dogs in person. Working dogs are bred primarily for protection and police work and are not well suited to be a family dog. That became clear once we met the dogs in person and spoke more with the breeder. We almost made a misstep there. 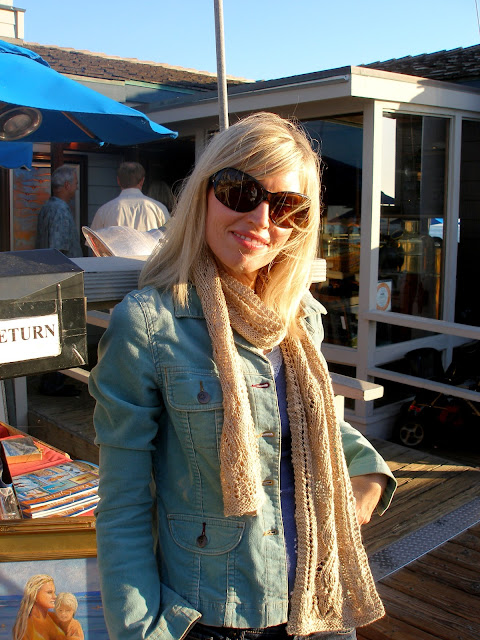 So we took another flight, this time to Dallas, Texas and I knit more on my scarf. On this trip we found the puppy we wanted. A healthy, highly intelligent, and beautiful show dog. He was almost what we had in mind not understanding at the time that a pure blooded West German Shepherd would be so different than a domestically bred German Shepherd. It's almost a different breed. Almost like a wolf, some say. Do we have regrets? We did in the beginning, when he first came home and was biting like a wild animal and rampaging about the house. But not now, even though he will still go on a rampage unless supervised at all times. But life has settled into a routine and is back to normal, almost. I have time to knit once again and, finally, I finished my scarf. 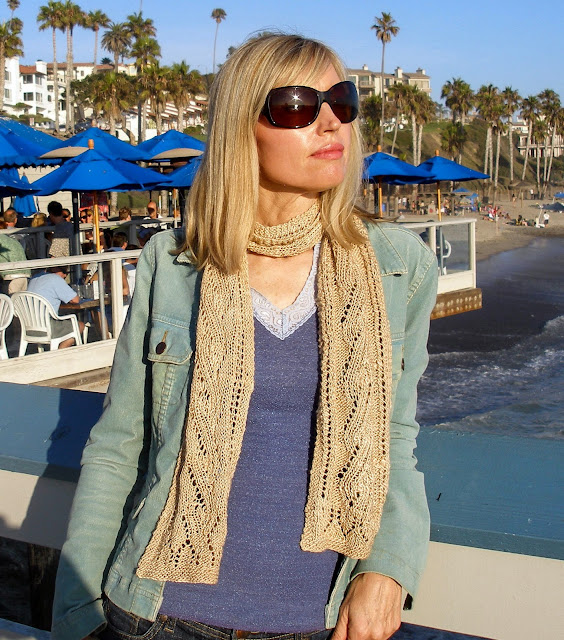 PS Steve took the above pictures on the San Clemente pier after we had dinner at the Fisherman's Restaurant in San Clemente, California. 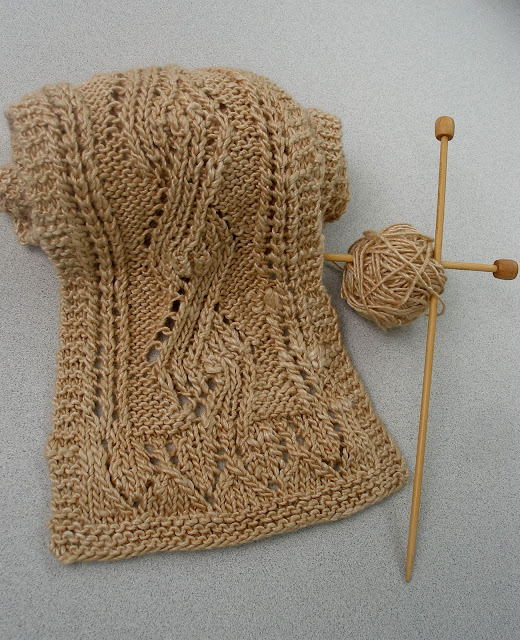 Particulars: A Very Nice Scarf, Designed by Linda Romens, purchased as a kit from La Lana Wools, 2 skeins La Lana's Phat Silk Fines. US 5 needles ~I used special short needles (9 inches long) specifically for scarfs (seen in the picture above). They are particularly light weight and enjoyable to knit a scarf on. Finished Dimensions: 5" x 56." I love this yarn but it is handcrafted and highly variable with "flaws" within the skein. I like the rustic appearance of the yarn and am not bothered by the slubs of silk and thick and thins spots. My first version of this scarf is blogged here and a shawl I knit also designed by Linda Romens is blogged here (both projects use the same yarn). I find this an interesting pattern to knit and I particularly love the serpentine cable which is unlike any other cable I've seen in patterns for handknits. 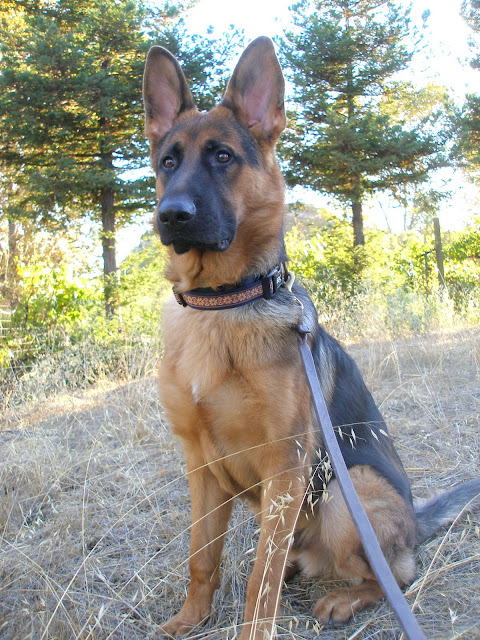 I would have liked to have had Simcha model my new scarf which reminds me so much of him. Except he's still a wild thing and knitting and yarn are not safe anywhere near him. You'll just have to use your imagination and pretend he's wearing it.


She Plays With Fiber 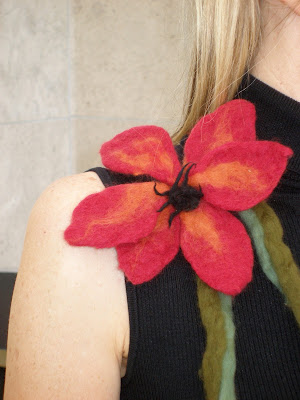 I don't believe in hiding myself under a barrel. At my age, it's more about expressing my personal style than anything else. I love the drama element this flower adds to my plain black top. Plus I made it myself and therefore I wanted to wear it and (trust me) it looked better pinned to my top than any other conceivable way of wearing it.

I made this flower by following a tutorial I bought on Etsy from Ingermaaike a very talented fiber artist who writes the blog Daily Fiber. Her instructions are wonderfully clear but I've so much to learn about felting that it even resembles a flower I think is a huge achievement! I'm new to the experience of playing with wool tops and roving that the spinners swoon over. Now I get it. The love of playing with fiber. Maybe someday I'll even learn to spin.

Until next time, be well and love well. I know it's hot out there, but it's almost Fall and time to assess what you will be knitting to wear come the cooler days of October!
Posted by Mr Puffy's Knitting Blog: at 7:43 PM 37 comments:

Maddox the Mischievous Monster and Pancakes!

Thank you all so much for your many suggestions on what toy to knit for Ellen's little boy.  I let Steve make the final selection and he chose Maddox the Mischievous Monster! A big thank you to Hilary (TheYarniad) and Kelly (Celtic Cast On) (both awesome knitters) who came up with this suggestion. 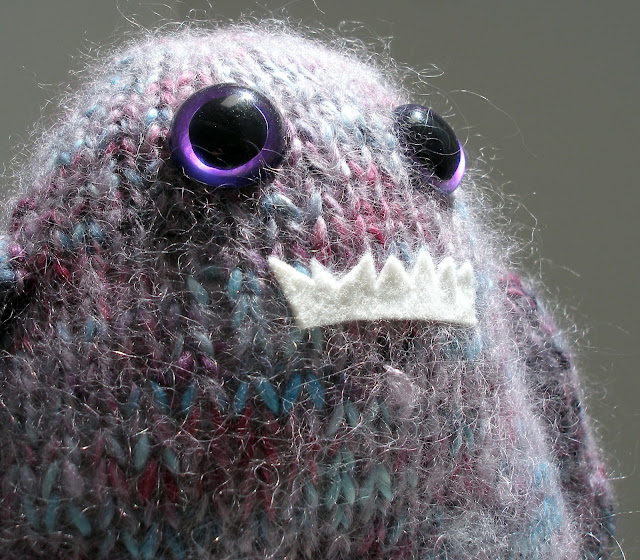 Maddox the Mischievous Monster is well known for small acts of mischief such as hiding socks and jumping out from under the bed and someone is responsible for my chewed up glasses.  Just look at those teeth.  And yet.  There is someone else in this household with big teeth.  Someone with more of a criminal mind.  I don't think we can lay blame for my glasses on Maddox.  Do you? 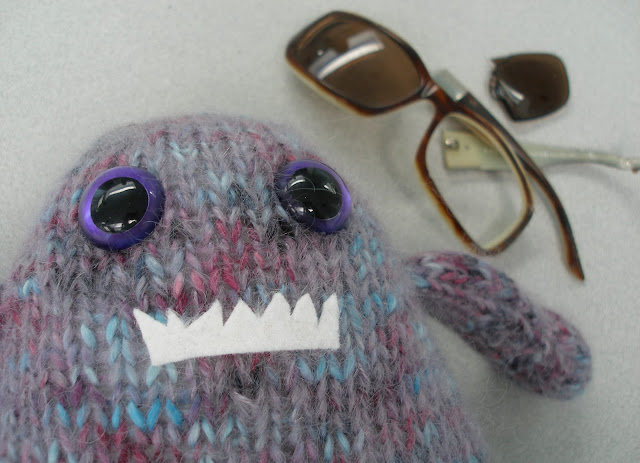 I was pleased that this was the toy Steve liked best because I wanted to make something fairly substantial in size that could be hugged and lugged about (the little boy is only just turning four next month).  It was also important to me that the toy be tactile in appeal similar to a fuzzy teddy bear.  To achieve that feel I selected a very soft base yarn and stranded it with a mohair yarn and it did come out very soft and fuzzy.

Oh, before I forget, aren't his eyes great!  They are Suncatcher Craft Eyes in metallic purple (24 mm size) sold at an incredibly reasonable price on-line by ChezMichelle. 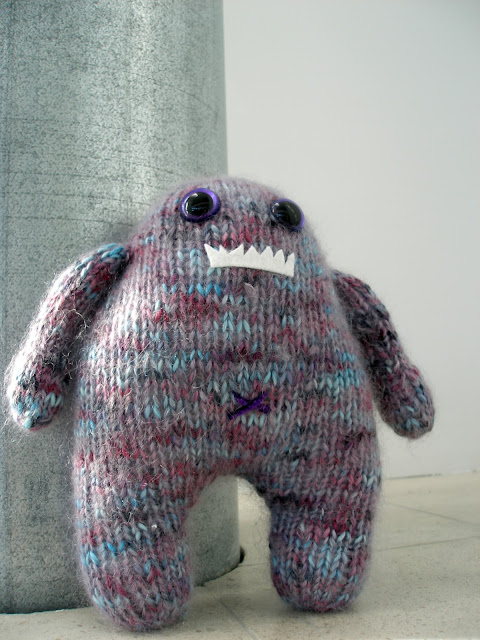 Particulars:  Maddox the Mischievous Monster by Danger Crafts; 1 skein (plus a small amount of a second skein) of Rehue Multy by Araucania, colorway No. 10 (baby alpaca 75%, silk 18%, 7% polyamide) stranded with kidsilk aura by Rowan; US 9 needles using both straight and circular.  No modifications except I used a kitchener stitch to BO instead of a 3 needle BO as I think that creates a softer seam.  Dimensions: 10" (height) and 17" (around his middle).

There were so many cute toy ideas either left as a comment or sent to me in a private email that I wanted to make a list for quick reference as a thank you to all of you for being there for me! 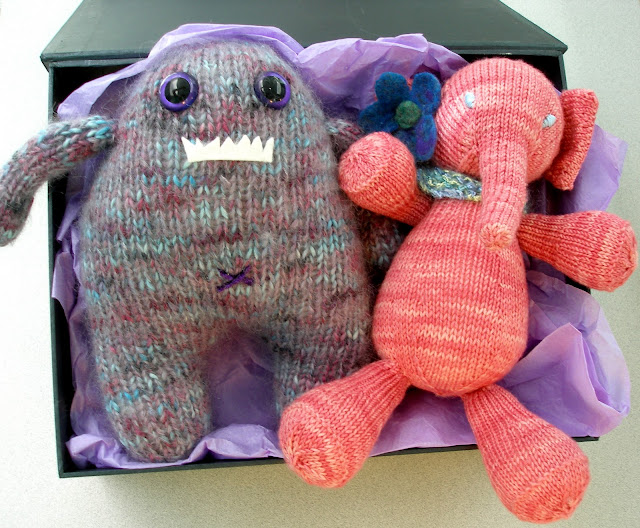 PS the flower attached to Miss Elly is a broach I made with hand painted wool roving.   There will be more about wet felting with wool roving coming up in later posts! 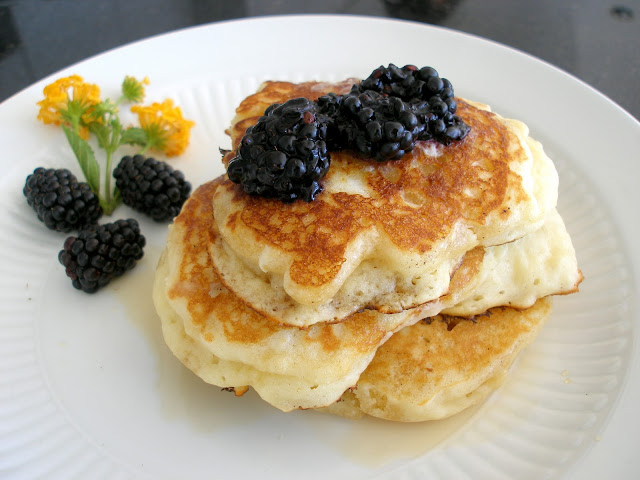 Maddox the Monster just loves pancakes for breakfast and, coincidentally, so do I.  So I thought I would send along a recipe for pancakes so he can be fed properly in his new home and I'm going to share the recipe with you too.  This recipe makes thick fluffy pancakes just the way I like them. The recipe came from an old copy of Joy of Cooking (at least I think it did) which is slightly different in the current edition.  Because I like them made this way, I'll share what I believe is an original version of the recipe:

Tip:  I like to flip my pancakes prior to all the bubbles bursting as I think it helps fluff up the pancakes to have some of the air bubbles still trapped.  Serve with butter, maple syrup and fresh fruit.

Until next time, be well, love well and why not add a Mischievous Monster to your life?  It's a great excuse to make pancakes!
Posted by Mr Puffy's Knitting Blog: at 11:08 AM 29 comments: