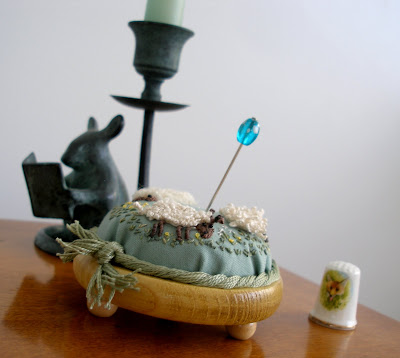 Some people lose interest in knitting during the Summer months when the days are sweltering hot, humid, and sticky and the heat is oppressive.  But not me.  I knit year round regardless of the weather.  And yet.  When it's very hot outside it is nice to have other crafts to work on that do not involve handling wool.  Such as embroidery. 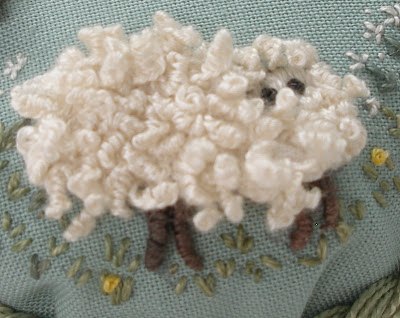 Like most knitters I love sheep from whence all fleece and hence yarn comes.  So when I saw this cute sheep adorned pincushion I couldn't resist. 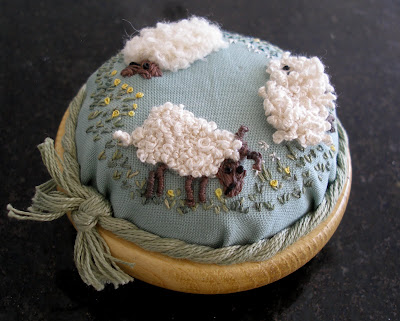 It came as a kit with everything included and very clear instructions so that even someone such as myself with relatively little embroidery skills could make it quite easily.  The nice thing about following a well written pattern is that once you've made it you can then transfer that knowledge to other projects.   I can see embroidering these cute sheep onto dishcloths, children's bibs and other clothing items. 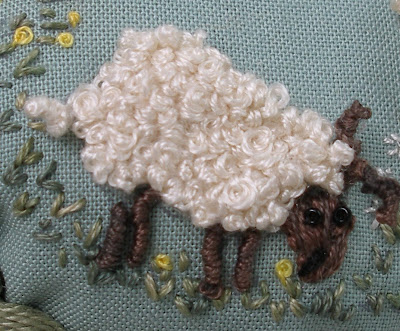 The sheep are each embroidered with a different stitch to give a different texture and, while I hadn't thought about it before, sheep do have a variety of fleece.  Maybe sheep fleece is like hair and some sheep are just lucky to have beautiful glossy locks while others are unlucky and have a frizzy mop.  Rather like a perpetual bad hair day. 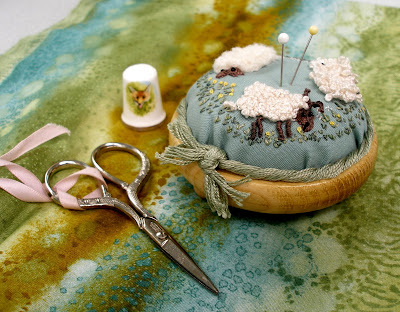 Particulars: Counting Sheep Kit (sold on Etsy) designed by Lorna Bateman of Vari-Galore Embroidery. Stitches include bullion knot, couching, drizzle stitch; satin stitch, and french knot.  The Kit came with everything I needed including needles and a handy stitch glossary for future reference.  I followed the instructions exactly and couldn't be happier with my finished pincushion.  I was also impressed with the silk floss and hand dyed thread that came with the kit.  I actually ordered more of the floss which is made by Chameleon Threads of South Africa.  If you are interested in hand embroidery I follow some blogs that regularly feature embroidery including Tiny Happy,  Posy Gets Cozy, and Allie-Oops Sweet Happy Life.

Investigation into the case of my missing cake flour.
Really?  It wasn't you?  Because you were the last one in the kitchen where I had my cake flour.

While Simcha maintains that he is innocent, I'm confident that I have my man.  At 18 months Simcha is still getting into mischief but is more cuddly and forgivable all the time.  Still, he does need a job and I am delighted to report that we have found him one and it involves sheep!  But I'll tell you more about that another time.

Until next time, be well, love well, and this Summer try varying your knitting with another craft, such as hand embroidery!
Posted by Mr Puffy's Knitting Blog: at 9:21 AM 25 comments: 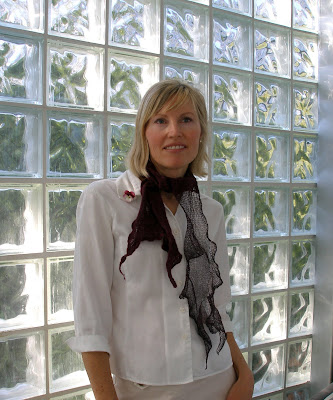 You mustn't think that I'm not aware I have a fixation on an earlier period in time.  Many of my projects reflect that fascination.  I particularly like projects that bring alive clothing items worn in an earlier era such as some of my triangle shawls.  But I also like to play with the juxtaposition an ancient craft in a modern setting or a modern design. 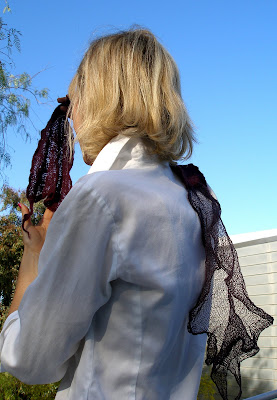 Woody Allen is an insightful writer and his most recent film, Midnight in Paris, focuses on people who have romanticized an earlier period of time.  I know this is true for me.  He said that it is to escape the painful reality of our present.  Maybe. I definitely felt aware of the glare of lights and a distaste for cars racing by as we emerged from the theater.  Owen Wilson, by the way, does a fabulous job of playing the role that would ordinarily have been played by Woody Allen. 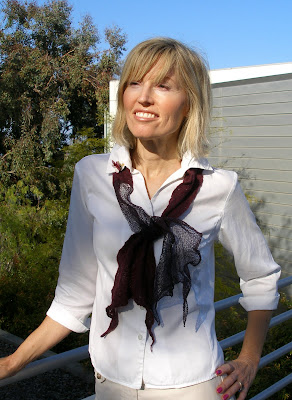 The scarf that I am wearing is using knitting and felting, two very ancient crafts, to create a very modern look.  The modern look is achieved by using a combination of different sized needles, the mixed medium of knit and felt, and a stainless steel yarn (decidedly a modern medium) to create an amorphous fabric.   The stainless steel yarn softens when washed and rolled in your hands.  During the felting process I worked both sides of the scarf with my hands, even the stainless steel portion, as I wanted to relax and stretch that as well.  Incidentally I have knit with stainless steel yarn before and you can see the tunic I made in the post, A Simple Summer Tunic. 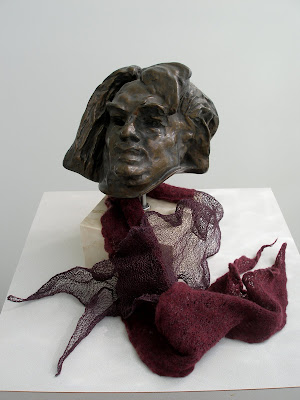 Particulars: Kusha Kusha Scarf (Kit-78) by Habu Textiles; design by Setsuko Torri; US 8, 6, 4, and 3 needles.  This is a very fun and simple scarf using stockinette stitch.  I knit mine a little longer than the pattern recommended as I think otherwise the scarf pattern is a tad too short.  When felting be sure to stretch the fabric and work it with your hands to achieve the dimensions you wish.   My pre-blocking measurements were 60" (40" combined yarn x 20" stainless steel).  While drying there was an "incident" involving Simcha.  Suffice it to say I had to cut out 90% of the stainless steel portion and about 5% of the felted portion.  To fix this, I picked up the remaining stitches and reknit the scarf working inward.  I joined the two sides with a 3 needle bind-off and the felting process melted away any evidence of the join.  All's well that ends well!  But this explains the strange "post" blocking measurements and why I cant' tell you exactly how I modified the pattern by row count.  Final post blocking measurement is 51" (28" combined yarns x 23" stainless steel).

A Taste of Summer ~ Blueberry Pie 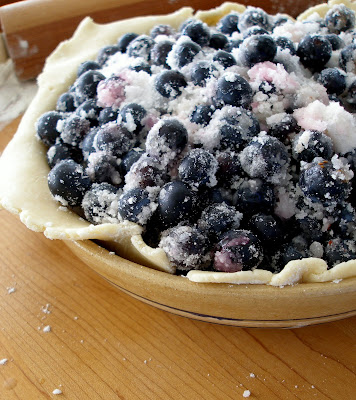 Homemade blueberry pie is one of Summer's treats and versatile enough for picnics or company dinner!  Steve thinks it might be his favorite pie, but he's not sure.  He can't decide because he loves tart cherry pie too.  But after rhapsodizing over every morsel he's already asking when we might have another one.  Note to Self:  blueberry has the slight edge. 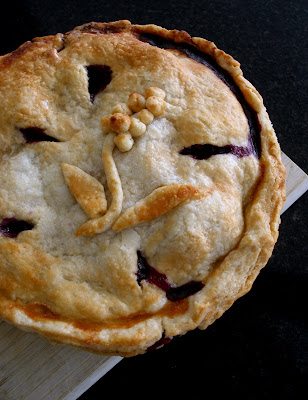 For the filling I followed the recipe on the Tapioca box except I used slightly less of the recommended tapioca and slightly more of the lemon juice (these were sweet berries).   I also cooked mine longer than the recommended time because a berry pie is not cooked through until you see the juice bubbling up through the crust.

For the crust I followed my mother's recipe which can be found in the post As Easy as Apple Pie. Did I serve it with warm with ice cream?  Does it take two to tango?

Until next time, be well and love well, and I hope your Summer includes at least one blueberry pie.
Posted by Mr Puffy's Knitting Blog: at 6:13 AM 21 comments: