Socks are the comfort food of knitting.  They are relatively quick to knit, easy to get a good fit, and oh so satisfying to wear.  And there are an infinite number of yarns and patterns to choose from ensuring there is something to delight the heart of every knitter no matter the skill level or persuasion. 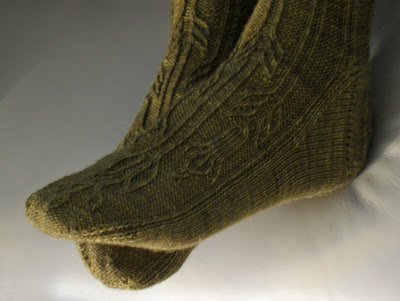 I would rate these socks as an advanced knit due to the twisting and cabling on virtually every row but it's precisely because of this twisting of stitches that they have great detail and are probably my favorite socks so far.  I say "probably" because I have a tendency to always love my most recently completed project best, but in this case it happens to be objectively true.  At least, at this moment, I think so.  I can be fickle. 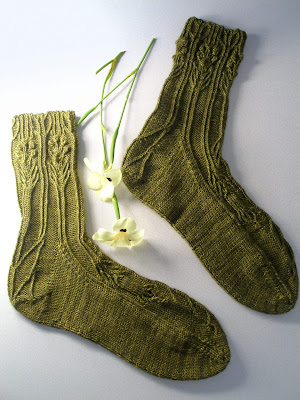 And since I am in need of comfort these days, I might just have to cast on another pair.  But who am I kidding?  I rarely knit the same pattern twice. 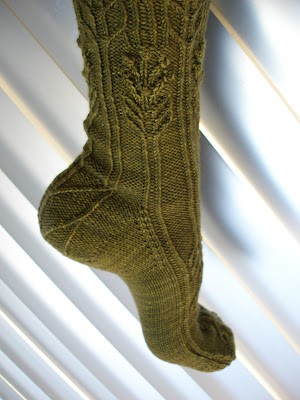 Particulars:  Kelmscott (formerly Mystery Sock 2012) designed by Kirsten Kapur (blogs as Through the Loops); US 1 needles; 1 skein Primo by Plucky Knitter (385 yards~ colorway Faded Grandeur).  This is a wonderful pattern but not the fastest knit due to all the twisted stitches and cabling.  The following are skills used in these socks: twisted stitches; cables; bobbles - while none of these stitches are difficult you do have at a minimum twisted stitches on every row and often twisting stitches combined with cables.

The Misadventures of Simcha and a Skunk  ~ 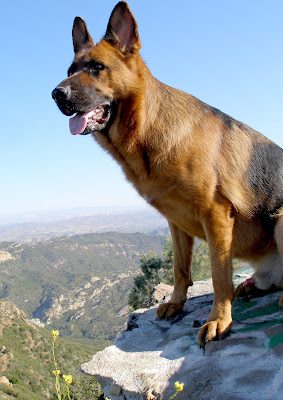 Eww.  We were skunked.  At least one of us was and it wasn't me.  The price of enjoying the great outdoors is the occasional interaction with native wildlife.  I didn't know Topanga had skunks until one appeared in our path while Simcha and I were out hiking.  I was shocked to see the tiny black and white creature meandering along in stark contrast to all native flora.  It's tail was held high and it looked like a strong gust of wind would blow it away yet it wafted along toward us without a care in the world.  At least it didn't have a care until it saw a 90 lb. German Shepherd charging him.  Then he got all huffy and turned tail, so to speak.  I obviously yelled "leave it" but a dog skidding to a stop 5 feet from a skunk is not enough to stop the inevitable.  Like all disasters it felt surreal. I had this hopeful thought that maybe Simcha hadn't actually been sprayed.  Maybe that smell in the air meant the skunk had missed his intended target?  But then why was Simcha laying on the ground rubbing his face in the dirt?  That did not seem like a good sign.  And on the walk back it became increasingly pungently clear that the skunk had not missed his target.  Oh joy.  All things considered it could have been worse.  I ran into a buddy who walks her dog on leash and they had both been skunked the week before.  These, folks, are the moments that separate the true dog lovers from the rest.  We were both out hiking with our dogs the very next day.

Until next time, be well and love well and if you have never knit socks then this Summer is the perfect time to indulge in a quintessential comfort knit.
Posted by Mr Puffy's Knitting Blog: at 1:53 PM 22 comments: