I chose to knit the shawl that I'm wearing because it reminds me of the American Southwest and its gorgeous sunsets and the clothing inspired by that region. 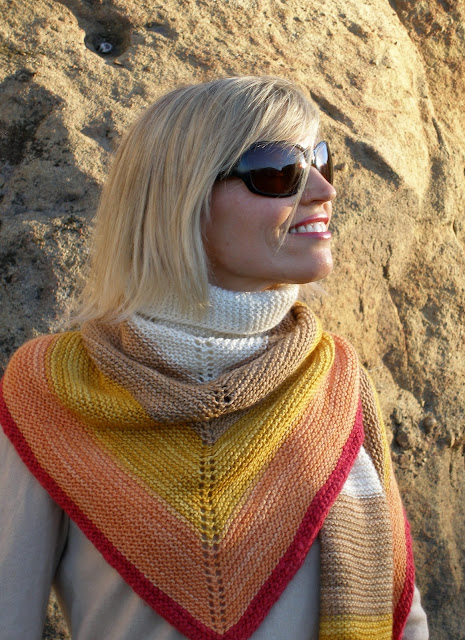 The Southwest is a beautiful part of America and has a distinct culture that is seen in its art, food, and clothing.   Steve and I once traveled by motorcycle all through the Southwest beginning in Albuquerque, New Mexico traveling up to Sante Fe, New Mexico and back through Arizona and ending up in Palm Springs, California. 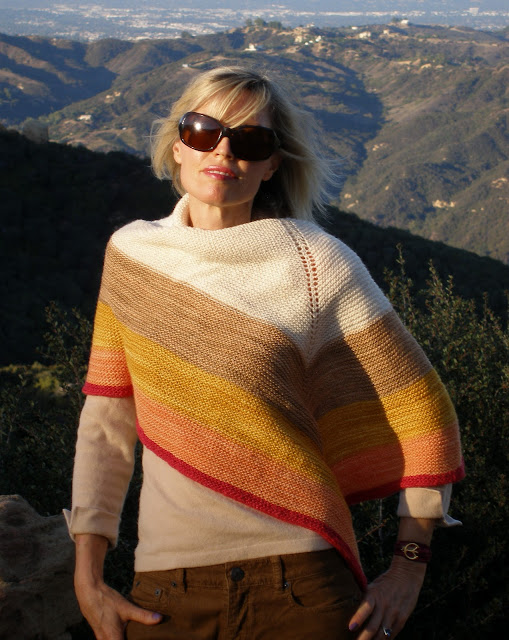 I loved traveling by motorcycle (I rode on the back) because you experience the landscape on a much more intense level as all the sights, sounds, and smells of the land have no barrier to you.  I'll never forget the beautiful ring of golden fire that outlined the mountain ranges as the sun set and the evening began.  If you are familiar with the art of the Southwest you will often see a ring of gold or bright light which represents the sunset and how the evening sky is etched in molten gold. 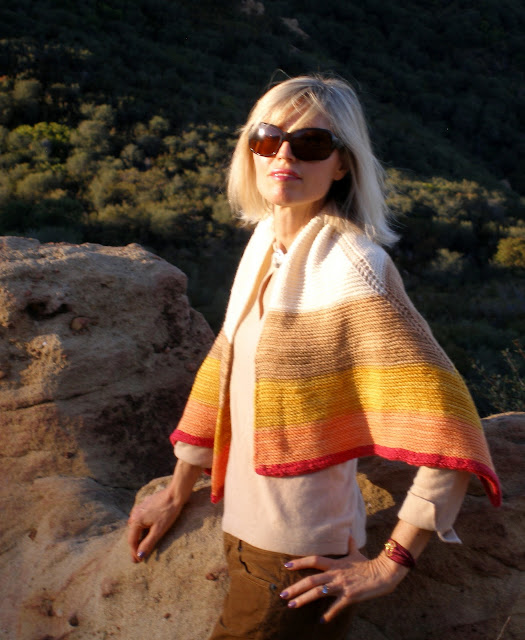 I see that landscape and the ring of fire in this shawl.  It also see, incidentally, Candy Corn but that might just be because it's close to Halloween.  I've included a few pictures from the trip we took (20 plus years ago) below and only wish I had taken some of the landscape. 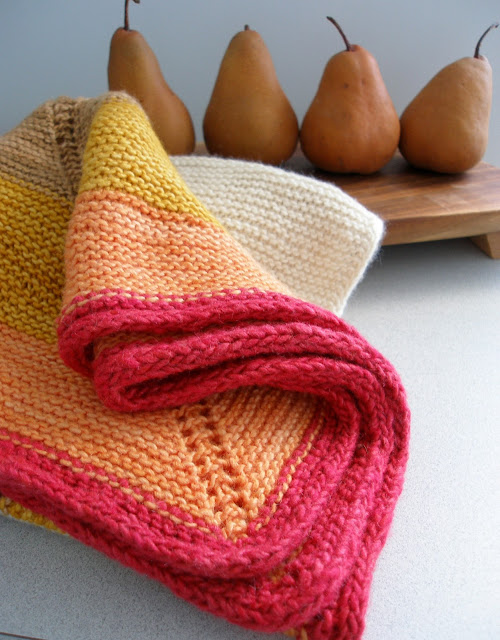 Particulars:  Grade, a Twice Square Rectangular Shawl, design by Grace Anna Robbins, A Stitch to Wear.  Modifications:  For the main body of the shawl I reduced the needle size to US 7 on account of substituting yarn to silky merino by Malabrigo Yarns (cream, sand, camote, topaz).  For the red border I used a heavier yarn (Noro cash iroha) and used US 7 needles for the first row and then US 8 needles until the i-cord bind off at which point I switched back to US 7 needles.  I liked the slightly heavier gauge yarn for the border because it adds nice texture and some structure for the shawl which is largely knit in a soft yarn. Blocked (lightly) dimensions: 42" x 20."  For more gorgeous modern interpretations of stripes see Veera Valimaki aka: Rain Knitwear Designs (blogs 100% Rain) who has designed several stunning striped shawls, including Stripe Study Shawl and Different Lines. 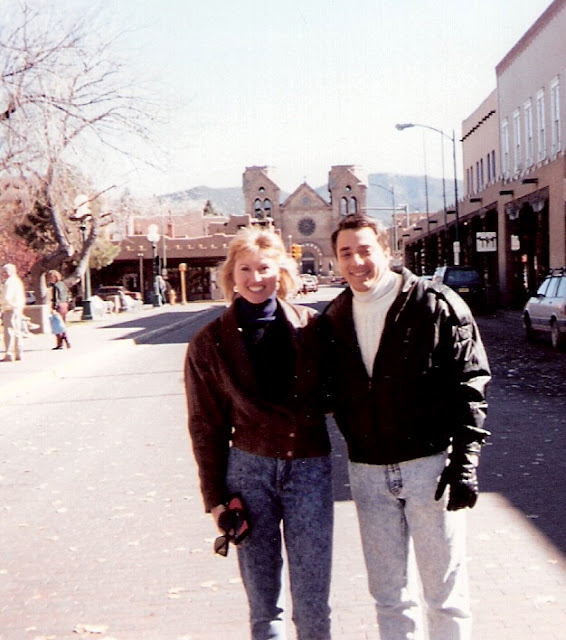 Steve shipped his motorcyle to a Bed and Breakfast in Albuquerque, New Mexico which is where we began our trip.  My favorite town was Santa Fe, New Mexico where we stayed at the famous La Fonda Hotel and below you can see we are in a square with various artist/vendors with booths.  Even back then I loved handcrafts. 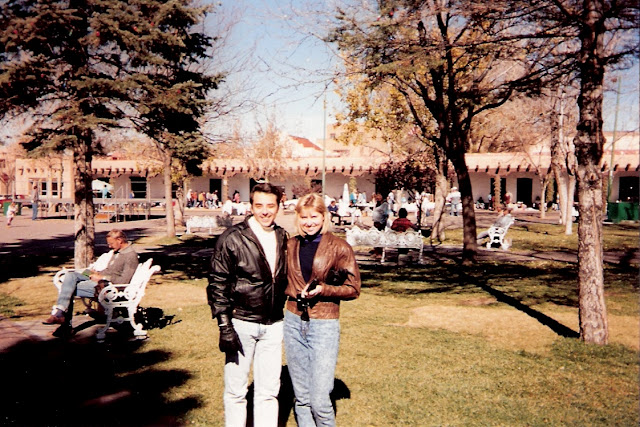 All of the pumpkins will belong to me..... Muahahaa! 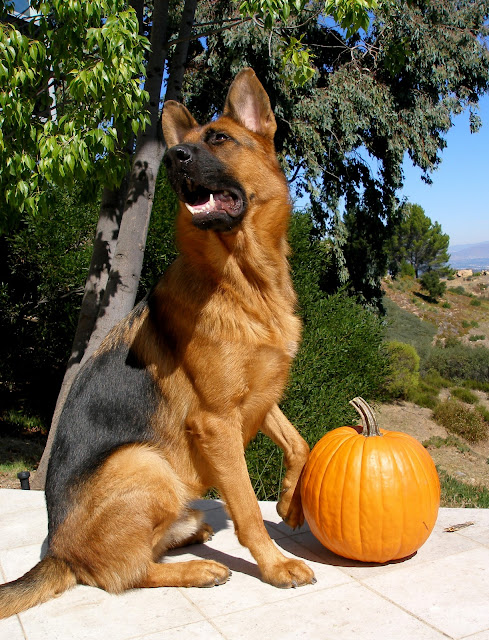 It was around this time last year that we discovered that Simcha had a possessive streak.  We had our pumpkin outside where he would “check it over” every time he went in and out of the house and one night he became enraged when he realized some animal was outside messing about with his pumpkin.  We did not get much sleep and in the morning we found the pumpkin covered in bite marks so this year I bring his pumpkin inside at night.  I hope he handles it well when I carve it.


Until next time, be well and love well and may you approach life as an adventure with each season a time to celebrate.
Posted by Mr Puffy's Knitting Blog: at 6:11 PM 21 comments:

Some of the ways that Knitters alleviate the boredom of the long Summer months is to join a Swap, a Mystery KAL, or a Yarn Club.  This Summer I did all three.  What can I say?  I'm a joiner.  While it can be risky to commit to anything sight unseen such as a yarn club or mystery KAL, I lucked out and really love the yarn and my mystery socks (and the Swap too, which I'll tell you about another time). 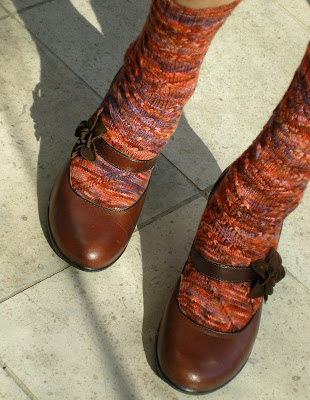 The "clues" in a mystery KAL are released weekly and in this case there were a total of 4 clues.  I confess that the final clue I knit and then ripped back and modified by adding an additional spiral all the way to the toe shaping cuz, like, there wasn't enough already going on with these socks. It's not everyone that will want a highly variegated sock yarn paired with a busy (made busier) pattern.  But that's the beauty of knitting it your own way. 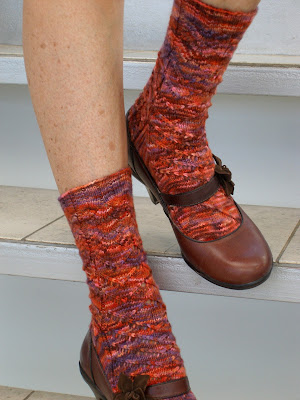 These socks look terrific both in a solid color and, I think, a variegated color but it was seeing Andi's Clue No. 1 (who blogs as My Sister's Knitter) in a beautiful solid red that sold me on joining the KAL. 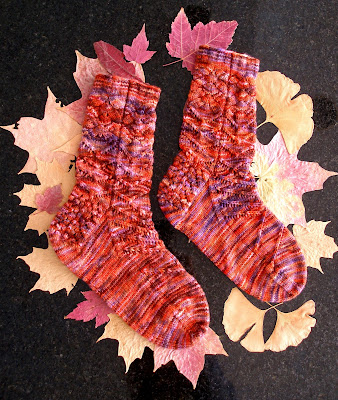 Particulars:  Mystery Sock KAL August 2011 by Jen Hansen (blogs as Knitting like Crazy) (pattern subsequently named Ripple Effect available as a free Ravelry download); Sock Yarn by Hedgehog Fibers (Phoenix colorway - July 2011 club colorway); US 1 needles.  Modified the last chart (Clue No. 4) by adding an additional band of patterning which spiraled all the way to the toe.  I added the additional spiral as I felt otherwise the pattern stopped rather abruptly. 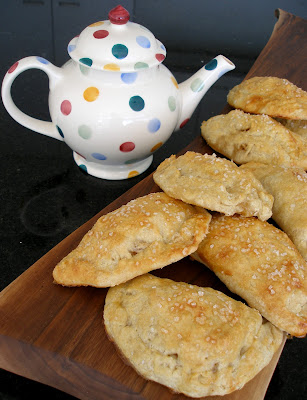 Whenever I visit my parents in Santa Barbara my Mom and I always take off together for an enjoyable morning walking downtown visiting the shops and having a coffee out.  Several years ago we discovered a small but wonderful rustic bakery where they served incredible warm apple tarts that came with whipped cream and a caramel sauce.   We would love to sit in this bakery with our packages and lovely coffees and chat while we enjoyed their wonderful treats. This little bakery has since closed but I'll always remember how much my mother and I enjoyed those times and, hopefully, on my next visit we'll discover a new special place for our coffee.

Apple turnovers are particularly enjoyable on a chilly Autumn day and, if you aren't going out for coffee, then the next best thing is to make your own.  These turnovers I made using King Arthur Flour's recipe Autumn Apple Turnovers.  I tossed in a few dark raisins to the filling and substituted 1 tablespoon Tapioca for the Pie Filling Enhancer and used Bourbon instead of boiled cider but other than that followed the recipe exactly and enjoyed them very much (even without the whipped cream and caramel sauce which, no doubt, would have made them even better). 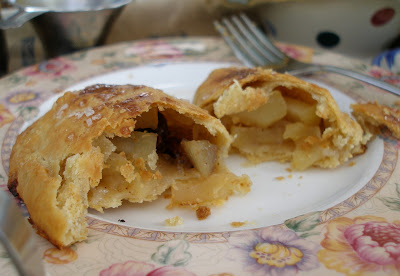 Until next time, be well and love well and do take time to savor the flavors of the season ~ whether it's something you treat yourself to while out, or you make it yourself!
Posted by Mr Puffy's Knitting Blog: at 8:27 PM 19 comments: