I wasn't prepared to love it this much. Knitting with beads, that is. I not only enjoyed my trip to a bead store to choose the beads but I also had fun knitting with them! 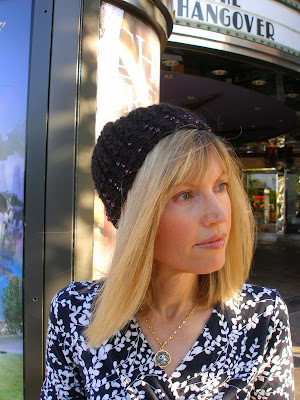 The hat I'm wearing is Soul from the Amber Collection by designer Kim Hargreaves. It is a slightly slouchy hat with a hint of glam provided by the fancy beaded trim.

Shopping for Beads and Things to Keep in Mind

I really had no idea what I was doing when I when in search of beads for this hat. I hadn't thought about the cost, for example. The first beads I spied seemed reasonably priced at 85 cents a piece. But consider the cost at 85 cents when you need 130 beads. Gulp. I decided to keep looking. I next spotted beads at a mere cost of 15 cents which, in comparison, seemed a bargain. Still, no bargain if you need 130. But, these beads were a perfect match to my yarn, so, on impulse, I simply pushed aside a handful of beads and told the clerk that I would take "that many" so long as it didn't ring up to over $10. I left the store holding a little bag containing 56 beads. At these prices I would simply make do with fewer beads. I suspect that purchasing beads from a "craft" store versus a "bead" store probably has a better selection of less expensive beads. 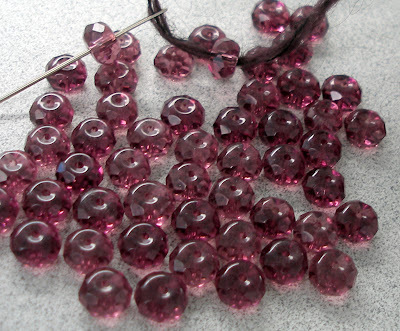 The other thing to consider is how to string your beads onto your yarn. To be fair, the clerk had mentioned to me that the beads I selected wouldn't work for the yarn I had brought with me (without elaboration). But, at the time, I had brushed aside her comment as a naysayer raining on my parade. It wasn't until later when I was trying to string my beads onto a worsted weight yarn that her comment came back to me. 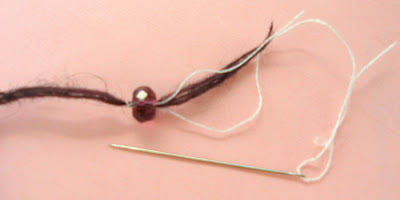 It turns out that stringing beads onto yarn has two limiting factors. This may seem like an obvious point, but until I was trying to string my beads neither had occurred to me. One limitation is the yarn density and the other is the size of the needle eye. Trying to shove a worsted yarn through a needle sufficiently small to also fit through your bead is never going to happen. However, I discovered that if you thread your needle with sewing thread and then tie the sewing thread onto your yarn it can be used to pull the worsted yarn through the bead, which was fortunate for me. The other limiting factor is the density of your yarn. If your yarn is of a dense character no amount of pulling and tugging will make that yarn fit through a tiny bead center.

Lastly, you might considered the weight that the bead will add to the knitting itself. All things considered, I was much better off for having fewer beads for this particular project given the size of the beads I had chosen. 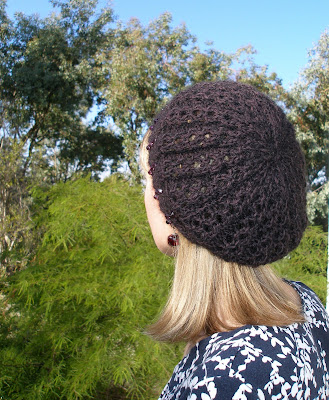 Adding Beads With a Crochet Hook

Instead of stringing beads onto your yarn and adding them pursuant to the directions of a specific pattern, an easy way to pop a bead onto your knitting wherever you might fancy is to use the crochet hook method. A great tutorial on how this is done can be found here compliments of a truly excellent knitter, FluffyKnitterDeb. I can seeing using this method to add beads to the trim of mittens, socks, sweaters, purses, shawls, really virtually anything that can be knit. The beauty of this method is that you do not need to decide in advance how many (or few) beads to add as you are adding the beads as you knit. 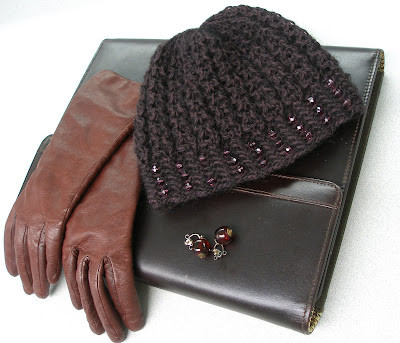 Particulars: Soul from the Amber Collection; 1 skein Rowan Kid Classic (shade 832); 56 large glass faceted beads (purchased at The Bead Lounge in Woodland Hills, CA); US 7 needles (circular; double pointed, and straights). If you don't have this knitting book, there is a similarly styled pattern I recently spotted called Indian Summer courtesy of Kalurah of While They Play. I made a number of small modifications to this pattern which I've noted on my Ravelry page. While I love the stitch design I don't think it's the most flattering fit on me and, while the pattern is extremely well written, it is more suitable to an experienced knitter.

The amber earrings pictured above, and that I'm wearing in the photos, were made by my crafty aunt who lives in England. Pam, like my mother, was a teenager during WWII and was part of England's Women's Land Army. She has written a short piece about her experience (as a lumberjack) for The Stratford Upon Avon Society, which can be found (here on the BBC website).

Enjoy the last vestiges of Summer and, until next time be well ~ love well ~ and happy crafting!
Posted by Mr Puffy's Knitting Blog: at 8:00 PM 33 comments: