Knitting the Blues and California Oranges 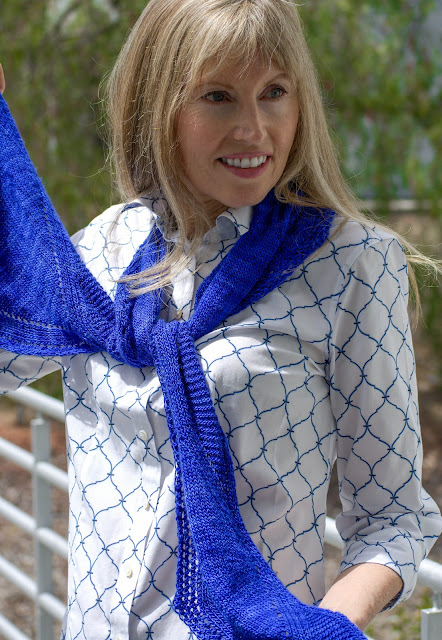 Miles and miles of gorgeous silky blue.  That's the best way to describe my new Caer Idris  scarf which is the second installment of the Ysolda 2015 shawl club.  This time it's all about the color and silky yarn that was specially dyed for Ysolda and it couldn't have been a more perfect choice for an early spring accessory.

The fiber artist Caerthan (of Triskelion Yarn and Fiber) who dyed the yarn for Ysolda has this to say about the color:


The late dusk sky was the inspiration for the colorway.  Idris was a legendary Welsh astronomer and giant, famous for watching the stars from his "chair" at Cader Idris.  The idea of a Welsh Kenning for the dusk sky caught my mutt (Welsh/Anglo/Saxon) imagination, hence "caer Idris" which means the fortress of Idris in Welsh.

I have no idea who or what he's talking about but I can tell you that this is one of the most beautiful yarns I've ever had the pleasure to knit with. 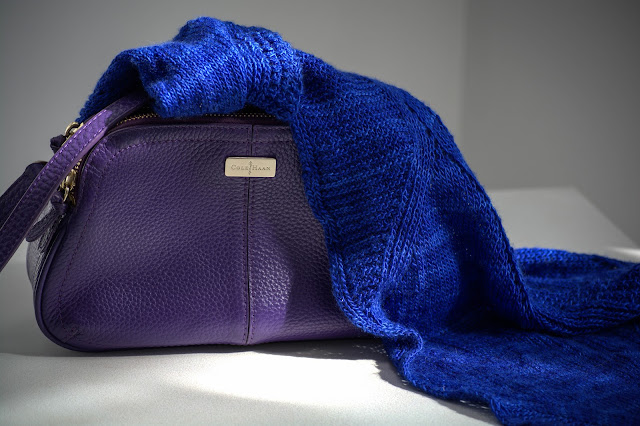 While I knit this scarf exactly as written I deviated dramatically is one small but important way. Instead of giving the finished knit a heavy block to create a superlatively long "wrap" I chose instead to not block it at all.  This created a scarf which I felt would be a more wearable accessory for me than the 120 inch wrap with large triangular shapes that a heavy blocking would create.  It's still voluptuously long at 81 inches but has what I would describe as a serpentine shape with soft curves undulating along one edge.  It's decidedly a scarf and not a wrap and the texture is amazing, so soft and warm and silky. And so while it makes a beautiful spring accessory I'm really looking forward to wearing this next winter wrapped around my neck multiple times for a cozy pop of color and warmth. 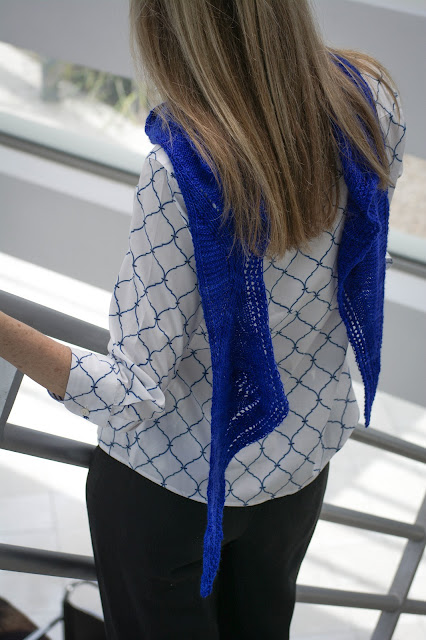 It's hard to see in these pictures because I did not give it a heavy block, but in person this pattern has a wonderful texture and design and *bonus* it's reversible which is a huge plus with any scarf.

Particulars:  Caer Idris, designed by Ysolda as part of her 2015 Shawl Club (this pattern - as all the club patterns - will be available for general purchase one year from date of club release); Triskelion Yarns and Fiber, Branwen 4-ply yarn (50% silk / 50% extra find Falklands Merino) exclusive dyed colorway Caer Idris; US 4 and US 5 needles.  I used the US 4 needles just for the first couple of inches at each end to provide a little more density but otherwise used US 5 needles.  I washed but did not block this scarf, i.e,. I laid it flat to dry.  Finished dimensions 81" in length.  This pattern is much easier and enjoyable to knit if you are comfortable "reading" your stitches and if you are unfamiliar with "reading" your stitches I provide some tips on my Ravelry project page.   If you want to see the first installment of Ysolda's 2015 shawl club it's blogged as Stac Shoaigh. 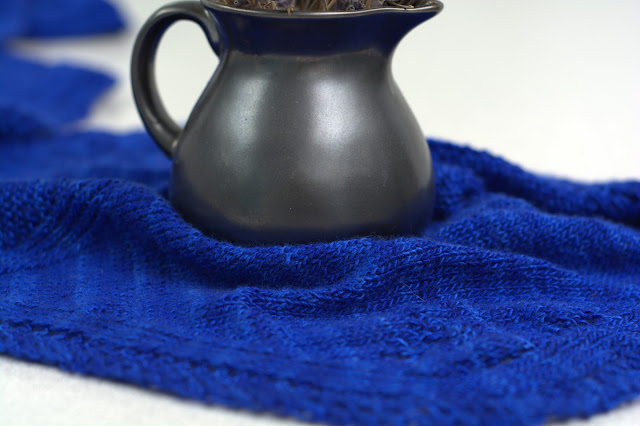 My Dad and his Oranges 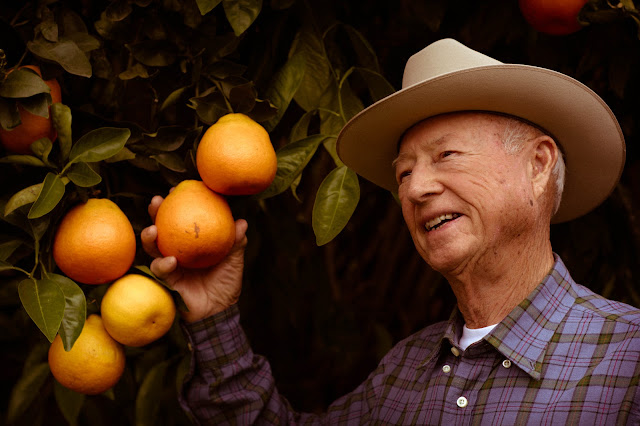 My dad is a wonderful role model for his character and discipline but also for his healthy lifestyle. At age 86 he is a picture of health and he's pretty sure it has to do, in part, with his daily intake of the orange juice and since that's an easy healthy habit to incorporate I thought I would share it.  My dad uses his own homegrown oranges that produce the sweetest and juiciest oranges on this planet but if you are like me and don't have your own tree then you must make do with buying oranges.  Although, as his daughter, I am often shipped boxes of his oranges or given bags to take home with me when I visit. Thank you Dad!  Incidentally I used his oranges in the pictures below.

But do you squeeze or juice, that is the question.  My dad is a squeezer but I believe juicing is a better method because when you peel an orange for juicing you can leave on the white pith and that gives the juice a nice creamy flavor. Whereas my dad prefers to squeeze because he loves all the pulp that you get from squeezing.  Or there is always the option of simply standing over the sink and eating it by the slice as juice runs down your face and hands which is probably my favorite way of eating an orange. 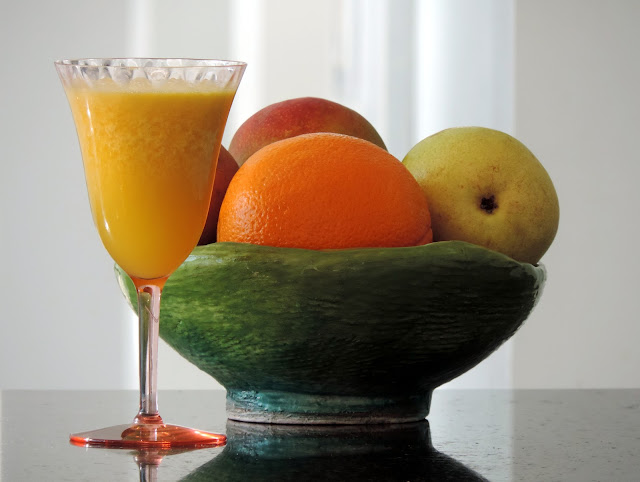 As I mentioned above my dad's oranges are the sweetest, juiciest and most delicious oranges you will ever eat which is the result of his loving attention and the perfect orange growing conditions of Southern California.  The only problem is that his oranges have begun disappearing.  It began gradually years ago and at first he suspected raccoons, which made my mother and I roar with laughter.  We asked each other if we had ever seen a racoon carrying an orange? Or could it be they brought a basket with them for transport?  Or maybe they rolled them down the road like bowling balls?  No, we laughed, we were sure it wasn't raccoons, but then again we didn't have an explanation for it either.  As it turns out the neighborhood children and hikers walking up the street have discovered his delicious oranges and collectively they are picking his tree bare.  An unfortunate dilemma.  I rather wish it had been raccoons. 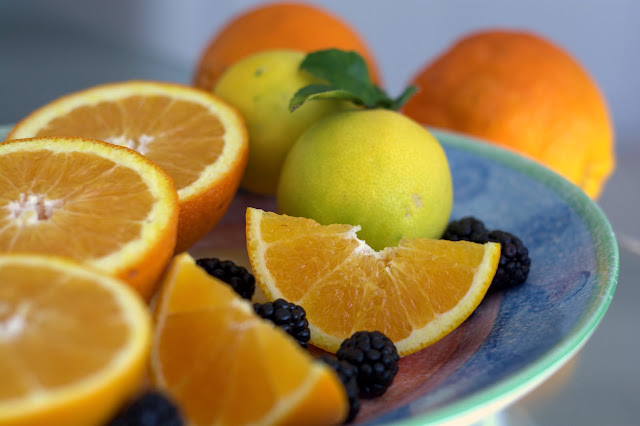 Until next time be well and love well and make healthy choices!  Next time you are asked to bring something to a picnic consider bringing a healthy choice such as a platter of sliced oranges instead of a bag of chips.
Posted by Claudia Bugh at 2:31 PM 6 comments: