I have been exceptionally busy these past few weeks, so this is just a quick post. I do have some knitting to show you, but I'll save that until next time. For today, it's just about cupcakes and puppies!

I much prefer a cupcake to a muffin. Do you? I think it's the lighter texture to the confection and its whimsical character. These cupcakes are inspired by ones that we enjoyed on our trip to New Zealand. While in Christchurch at a fancy department store I had a wonderful blueberry muffin with white chocolate frosting and I've longed for another ever since. This is similar but instead of using chocolate frosting I made a lemon frosting to please Steve (who isn't fond of chocolate but is very very fond of lemon frosting). But I do think he could have waited until I took the pictures before he had his first one! Boys will be boys *le sigh.* 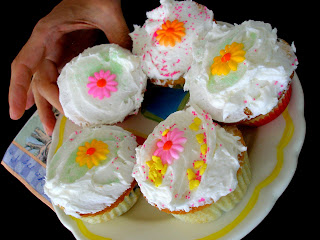 This is the Food Network's classic white cake recipe into which I simply folded approximately 1 cup of blueberries as a final step. The recipe is found here. I often use this recipe for a basic white batter as it produces a nice light cake. It yielded 18 cupcakes.


On to the Puppies

Actually, it's just one puppy. But it feels like more. We had forgotten what raising a teething puppy was like! Alex, our first German Shepherd, we adopted twenty years ago and he passed away in 2001. Enough time to have forgotten what all is involved! But, as promised, a little about Simcha. Simcha is a pure German Shepherd of West Germany descent which means he is less likely like to have health problems from inbreeding. He is very very smart and is growing by leaps and bounds! He was twelve weeks old before he came home with us, rather than the typical eight weeks. That means he had 4 additional weeks with his litter mates. On the shelf, so to speak, until we spotted him. I mention this, because that additional time with his litter gave him ample opportunity for wresting and developing a strong self confidence and, to our mind, a rather exalted view of his position in the pack. A position that must necessarily be bit lower in our home. As Jane Austen might observe, he is to remember when mingling in society that he is to always be the lowest and the last. Hard to remember when you are a little dog. And, he's so darn cute, it's hard for us to remember too! 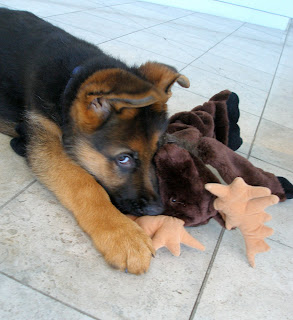 Until next time, be well, love well, and do find time to enjoy a cupcake!

PS Simcha is playing with a toy Moose that was sent all the way from Canada from my dear friend Monika (Smoking Hot Needles) and her son, David. To say Simcha was overjoyed with his gift, would be an understatement. Thank you Monika and David!
Posted by Mr Puffy's Knitting Blog: at 7:00 PM 34 comments: