The Shaelyn Shawl is a relatively new pattern and is sure to be popular this season because it is an easy and quick knit with stunning results.  But why have the same shawl as everyone else?  Instead break a few rules and have a shawl that is uniquely your own.  Here's a few ideas on adjusting this or an any lace pattern to better suit your personal style. 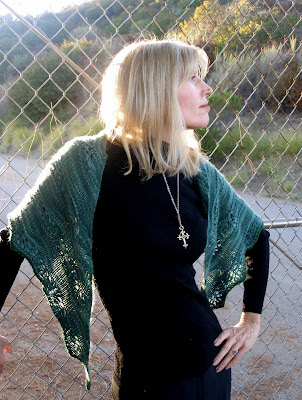 What if the pattern recommends a sport weight yarn? Why limit yourself.  If you find a yarn you like in a different weight go ahead and try it.  I'm using a worsted weight yarn; I always say in for a penny in for a pound. 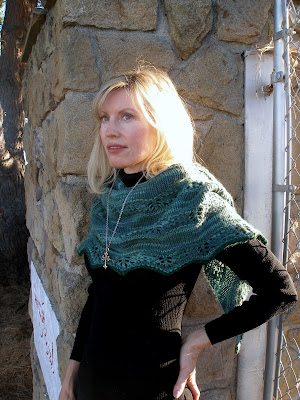 Most people will tell you that lace shawls should be heavily blocked to emphasis the pattern. But, meh, why?  I lightly blocked this pattern and saved the heavy block for the top to extend the top width.  Personally I think heavily blocked shawls tend to look a tad old fashioned. 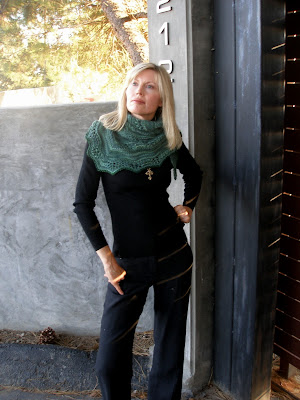 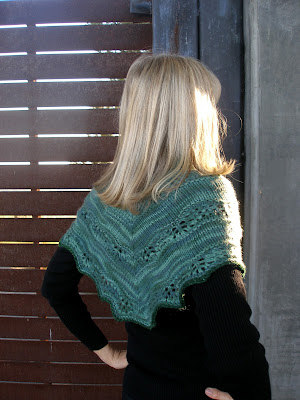 The result is a shawl uniquely my own with a slightly Goth feel and I am not displeased.  Now all I need is a dark moody novel to curl up with.  Suggestions anyone? 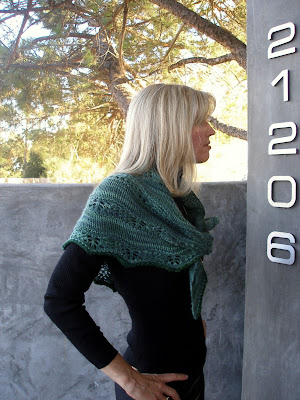 Particulars: Shaelyn Shawl by Leila Raabe; 3 skeins Jade Sapphire 6 ply cashmere (20 grams left over) and a small amount of Noro Retro for the bind off; US 9 circular needles.  Modifications: none other than yarn weight substitution.  I followed the pattern alternate version to purl 2 together instead of knit 2 together in all lace section. For the loose BO I used my favorite BO which is k 2 transfer those 2 stitches back to left needle and k2TB then k1 repeating until last stitch. 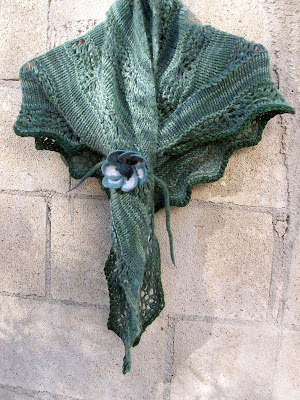 I wet felted a flower specifically to match this shawl and I like it worn this way too.  For the flower I used the tutorial for flower making by Ingermaaike sold in her Etsy shop.

Until next time, be well and love well and enjoy the change in season.  Wrap yourself in a cozy shawl and go out and experience all the wonderful colors, flavors and decorations that make this such a fun and special time of year!
Posted by Mr Puffy's Knitting Blog: at 7:45 AM 32 comments:

I have some Fall knitting to show you, but first here's a quick post on green tea, the second in my series on the teas of China. You can read about Chinese Chrysanthemum tea here. 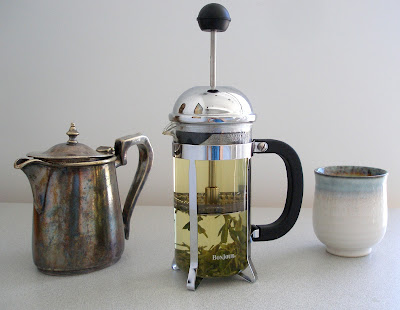 If you don't like green tea I suspect it's because you haven't tried the right kind. At least that was the case for me. It wasn't until our trip to China while waiting about in the Shanghai airport that I discovered how delicious a really good green tea could be. I had ordered a spicy bowl of noodles and at the last minute decided to try a green tea with my meal. The tea was brought over to our table in a french press (just like the one pictured above) with the leaves still swirling about and after one savory sip I was hooked.

I had tried green tea before, but had found it bitter and not at all similar to the rich savory brew I was drinking. I have since learned that the reason for this is that green tea is rather like wine. There are multiple varieties and the price can range from cheap to $$$. If a green tea doesn't specify what type of green tea it is, then it's a sure bet it's not one of the better varieties. One of the best varieties of green tea is "dragon well" but be warned the quality varies considerably. After my lunch I went immediately into an airport gift shop and bought a pricey tin of what I believe is a dragon well tea from the Ganchun tea Company. I can't be certain because I don't speak Chinese and they didn't speak English but I did pay a fortune so it must be the good stuff, right? I have enjoyed every sip and felt the money was well spent.

Turns out, though, you need to pay close attention when making a green tea to enjoy it as its best. A french press is perfect for green tea because it should be brewed in glass or porcelain so as not to taint the flavor. You can also immerse the leaves up to three times by simply adding more hot water, but the water should never be boiling. If you are interested in how to properly brew dragon well tea, I found this video on Walker Tea Reviews very interesting and helpful. 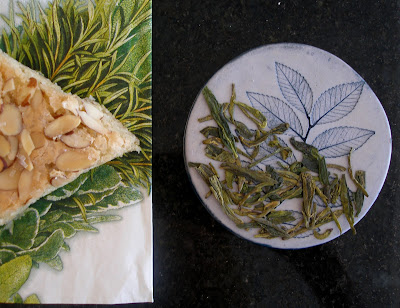 Whether you are enjoying a green or black tea, you can never go wrong with a slice of my Almond Delight Cake (pictured above). It's simple to make, moist, and has a rich almond flavor and is perfect for when you have last minute company! You can find the recipe in the post Is it Time for Tea? 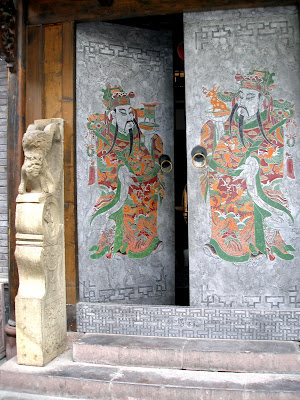 Along with food and knitting I like to share some of the culture of places we have visited. You have probably seen the above images whether in a movie or magazine as they are ubiquitous in China. They are known as "Door Gods" and I learned their story over lunch when I asked our host to explain their significance.

Apparently the first Emperor of the Tang Dynasty had a nightmare that he was going to be killed while he slept. The next day he had two warriors placed outside his bed chamber to stand guard overnight. No harm came to him and it became the custom in China to paint these warriors on door fronts as a warning and to protect the occupants from harm.

China is a very mystical land with a long and rich history that is undergoing a period of tremendous change. The juxtaposition between the old and new culture is fascinating to see. Even the most sophisticated Chinese business people still believe that amulets bring power and luck to the wearer and I was given a jade bracelet to bring me prosperity and good luck. Come to think of it, where did I put that bracelet anyway? I could use a little good luck these days!

Until next time, be well and love well, and try a cup of green tea ~ it is good for your health ~ and that's not a myth.
Posted by Mr Puffy's Knitting Blog: at 6:32 PM 26 comments: