The Indispensable Trait of Determination for Knitting and Life


It's been unusually cool this Winter in Los Angeles, California.  How cold has it been you wonder?  So cold that we've been needing clothes that we typically don't need in LA.  Like socks.  Fortunately that's no problem for me as I've knit many a pair over the years.  But I don't have many of the sturdy variety and hence these Carlos and Arne socks have been great to have this winter. 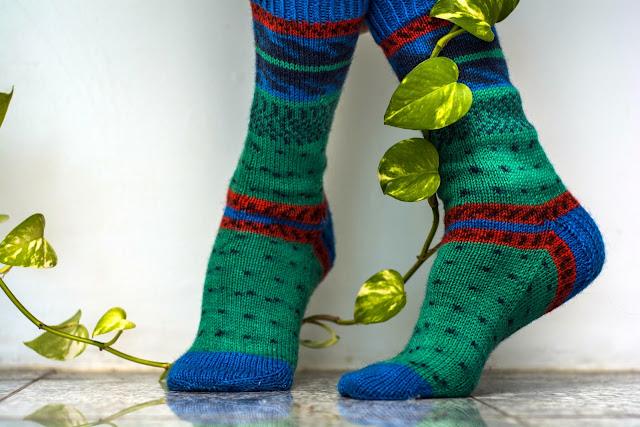 I have to admit that knitting these socks was a love/hate affair.  It's obviously a self patterning yarn and, incidentally, the first commercially dyed self patterning yarn I've knit with.  While I loved the beautifully intricate pattern magically unfolding as I knit without any effort on my part, whatsoever, I was also turned off by the scratchy feel of the wool traversing over my fingers.  And knitting is a very tactile experience.  Hence the hate.  I almost tossed them aside as not worth the bother.  To be fair it was summer when I was knitting them and in the warm summer months lots of wools can feel scratchy.  But when I thought am I such a wimp that I can't handle a little scratchy wool?  Seriously?  That's pathetic.  So I determined to finish them and am very happy that I did.  You know what else?  Magically when the weather turned cool the wool suddenly wasn't scratchy any more.  I have no idea what the science is behind that.

The moral of this story is that sometimes you have to stick with things through thick, thin and scratchy times.  Because if you don't then you may miss an opportunity to add color, warmth, and satisfaction to your life.  Like these socks have to mine. 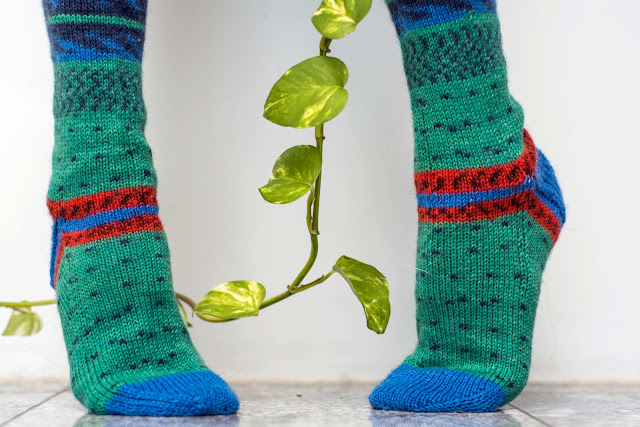 PARTICULARS: Pairfect Design Line by Arne & Carlos, Schachendmayr Regia Sock Yarn (75% wool / 25% polyamide); (Colorway #9090); 100 g 459 yrds.; US 1 DPN; I followed the pattern provided on label and made no modifications whatsoever, other than I followed my own toe decreases from my Colorblock Socks pattern.  This sock yarn is a tremendous value and I highly recommend making your own Pairfect socks!  They should wear like iron.  But if you are more interested in luxury sock yarns I would recommend a mix of merino wool, nylon, and 10% cashmere and a favorite brand of mine is Sun Valley Fibers, MCN (80% merino, 10%cashmere and 10% nylon) which is what I used for my Winter Rose socks and for another pair I have yet to photograph. 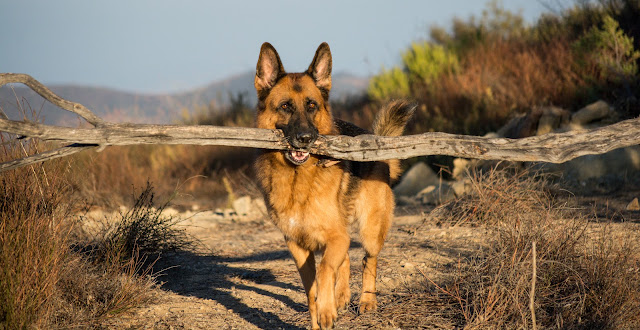 The topic of determination and sheer doggedness would not be complete without a Simcha antidote, who has more determination in his right pinky err paw than most people have in their entire body.

For Simcha size has always mattered.  From the time he was a little puppy it didn't matter if it was a toy, treat, or stick it was clear that bigger was definitely better.   Out on the trail hiking he doesn't pick up any old stick.  Instead he will forage to find the very biggest stick around and then he'll carry it for long distances before eventually discarding it.  It's not always easy for him to extract these massive sticks.  They are often partially buried in the ground or entangled in limbs of trees and bushes but he will thrash about pulling until it breaks free (I used to pitch in and help him with this until he accidentally sliced my finger in half and after that I decided he was on his own). There was only one time when I thought he was going to be defeated.  He had jumped off the trail into some brush below and there was a  sheer rock wall that had to climbed to get back on the trail.  I stood and looked down watching him.  He had found a large stick that he clearly wanted to bring with him.  He was whining in frustration because he had made several failed attempts to get up that rock wall with his stick.  I could see the problem was that he didn't have enough space to run and gain any momentum to help carry him up.  I thought he was beat.  But then he put his head down, griped that stick in his jaws, raised his head up and by the sheer force of his determination clawed his way up that rock face onto the trail with that giant stick in his mouth.  I was astonished.  He's older now and doesn't have the same drive and determination but I'll never forget seeing him do the impossible.

There's a number of excellent books about dogs and their amazing stories.  I know he's fictional but I think that Simcha has much the same personality as Buck from Call of the Wild by Jack London.  I also love the book Where the Red Fern Grows about a boy and his dogs growing up in the Ozarks.  And my dad used to read Old Yeller aloud to my sister and me when we were little.  These are all sad and yet wonderful stories.  If you have a favorite book about a dog I would love to hear your recommendations. 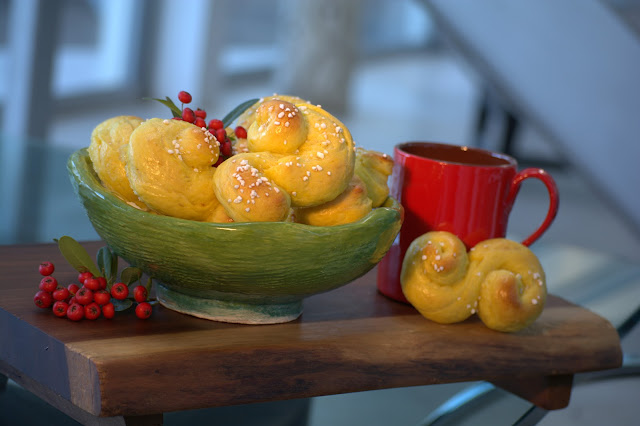 I love the idea of welcoming winter with celebration and those things that bring warmth and comfort into our lives. Which is why the St. Lucia celebration in Sweden appeals to me.  Well to be perfectly honest it's the rich tasty St. Lucia buns that appeal to me.  Flavored with saffron and vodka these buns are warm and savory with a tiny sweet crunch from the pearl sugar topping.  They are simple but I really like them.  It must be the Swed in me. If you are familiar with St. Lucia buns and this celebration then you know that I'm late in making these (St Lucia is celebrated on the first day of winter).  But honestly being untimely hasn't effected my enjoyment of the buns one tiny bit. Note to self: Make these every winter, preferably on St. Lucia Day.  Recipe from Bake from Scratch Magazine, November/December 2018.  The New York times shares a St. Lucia Bun recipe (highly rated) free online.

Until next time, be well love well and may your winter months be filled with warmth, comfort food, good books and cozy socks!
Posted by Claudia Bugh at 2:06 PM 10 comments: