Growing up in Central California I have always been surrounded by oak trees. They are ubiquitous in that region and where I live now in Southern California. If its not California's state tree, then I think it ought to be. 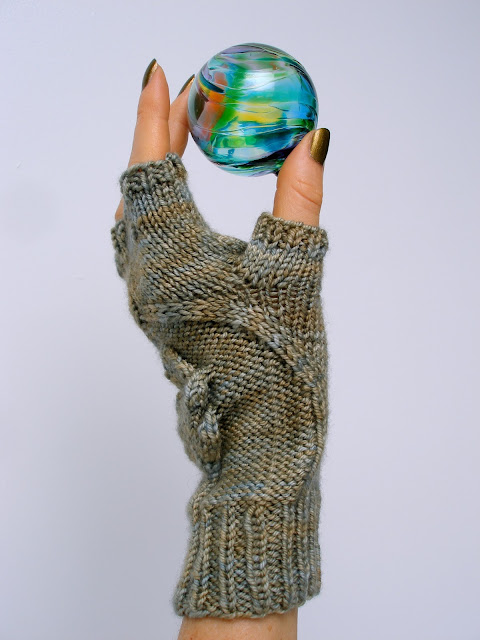 For that reason, it's only natural that I wanted to knit these mitts.  Not only do they feature an oak leaf motif but they are also knit in a fingerling weight yarn which is perfect for the climate and casual lifestyle enjoyed in California.  Because while it's not often cold it is often cool outside early in the morning when it is nice to hike or bike or whatever you enjoy doing. 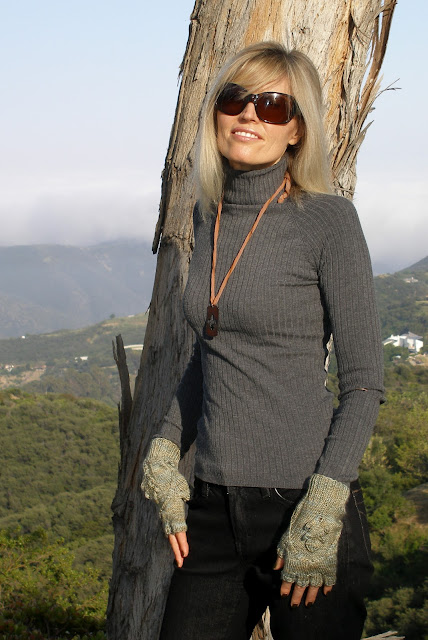 But no matter where you live there are activities that take you outdoors.  And fingerless mitts are a great way to keep your hands warm while allowing you the mobility to actually do something with your hands.  For example, I like to wear this style of mitt out for coffee and you would be surprised how many comments I receive both from men and women.  There's something very appealing, apparently, about sipping coffee wearing mitts if the attention they receive is any indicator.  "Those are nice gloves" says a wistful admirer.  Smiling I say "Thank you. I knit them myself." 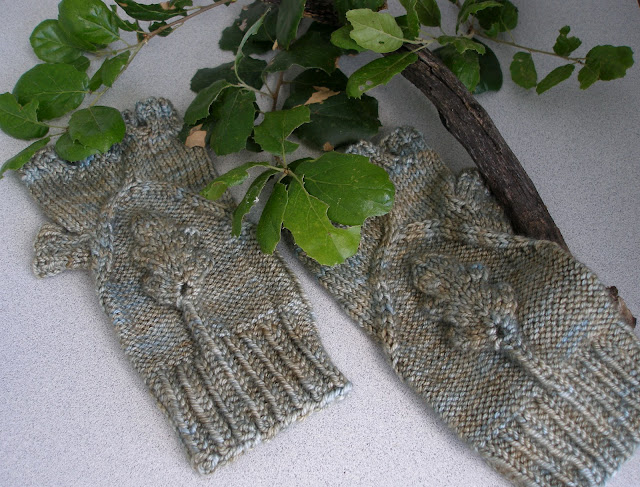 Particulars:  Oak Grove Mitts designed by Alana Dakos (nevernotknitting); madelinetosh pashmina (left over yarn from my Autumn Vines Beret); US 3 double pointed needles.  I made the version with fingers but found knitting the fingers a bit tedious and another time I would simply make the fingerless version.  I love fingerless mitts and there are a number of cute free patterns in blogland including: Kyla Mitts; Horray for Me Gloves; Susie's Readings Mitts; Garter Stitch Mitts; and Great Weekend Mitts.  Incidentally, its my Kyla mitts that have received so much attention.

For those who may not be familiar with oak trees and California flora, I took the following pictures at the Santa Barbara Botanical Garden which is ten minutes away from where I grew up in the beautiful foothills of Santa Barbara, California. 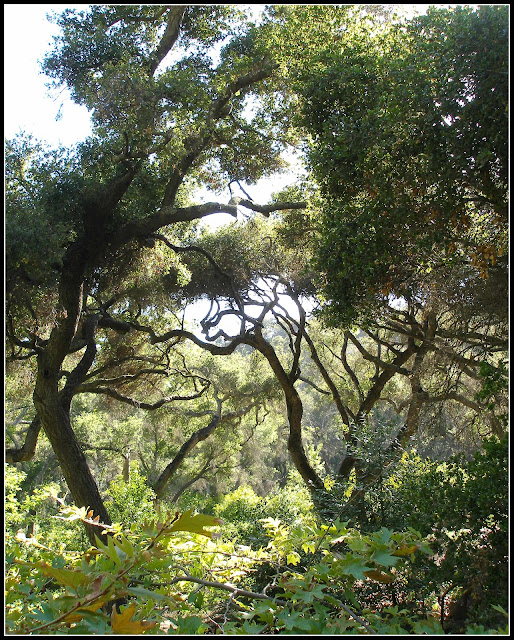 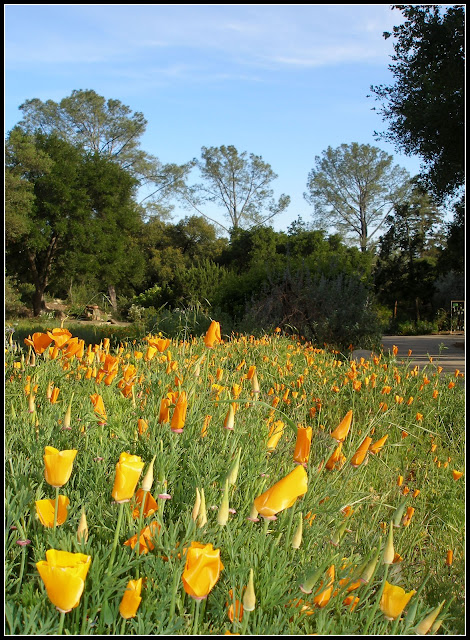 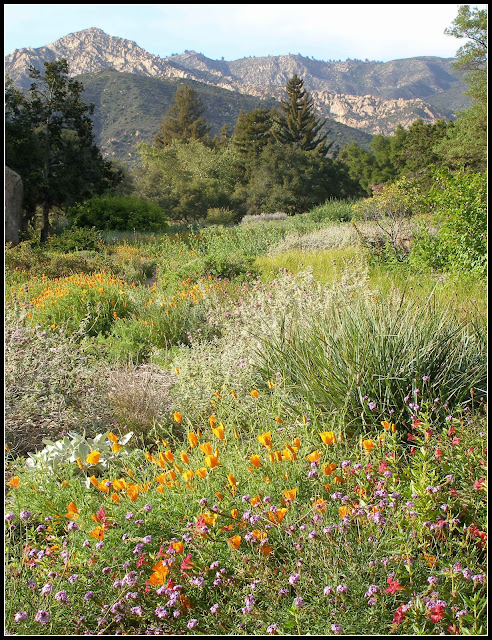 April and early May is probably the nicest time to visit the botanical garden as the wildflowers including masses of California poppies are in bloom.  And, I am reasonable certain, poppies are in fact the California state flower. 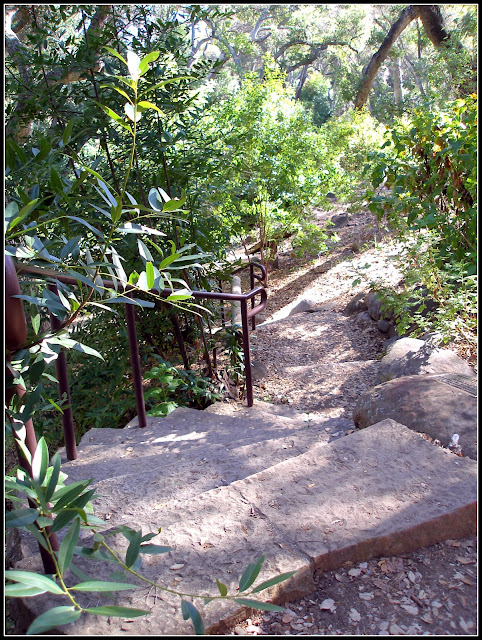 Until next time, be well and love well and follow your heart on whatever path it leads you.
Posted by Mr Puffy's Knitting Blog: at 11:25 AM 20 comments:

Topanga is known for it's crows, rattlesnakes, and coyotes.  But there are a few other forms of wildlife including mountain lions (rare) and owls.  Most nights I can hear an owl hooting in the distance but I've never seen one during the day.  At least not until now. 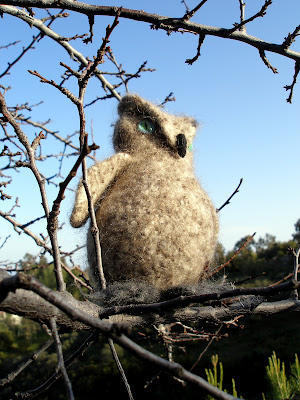 This is Hootie the Owl and he's hand knit and machine felted.  I'm very pleased with how he came out and might just make him a friend.  I've always been fascinated by owls and when we lived in the Midwest many years ago one year for my birthday Steve bought me a owl house.  It was a large wooden box that had to be placed high up on a tree and it took ladders and a great deal of effort to hang.  Since we lived on the banks of the St. Joseph river surrounded by tall trees I was sure an owl would come and stay in my beautiful owl house in the woods. 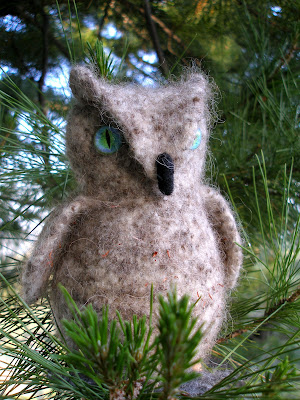 But one never did. I was slightly mollified when Steve pointed out that they must be very fussy birds if they passed up that birdhouse.  Nonetheless the appeal and mystery of owls has never diminished for me.  And I just hope this little guy likes his home and doesn't decide to fly away. 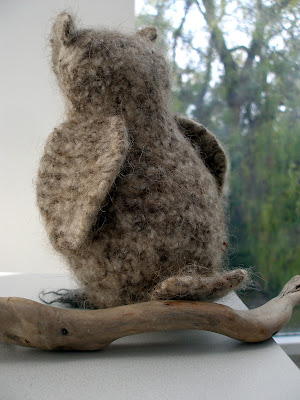 Particulars:  Woolly Owls by Marie Mayhew Designs; US 10 1/2 needles; Nature Spun worsted yarn and Frog Tree Brushed Suri yarn (the yarns recommended in the pattern).  This is a great pattern and a fun knit and I made no modifications whatsoever.  He is knit and then felted in the washing machine.  I used handmade glass eyes (16 mm) by Artist JP that I glued on using clear silicone glue (at the artist's recommendation) and the glue seems to be holding well, but this is not a toy.  If it were going to be a toy I would not choose eyes requiring glue. 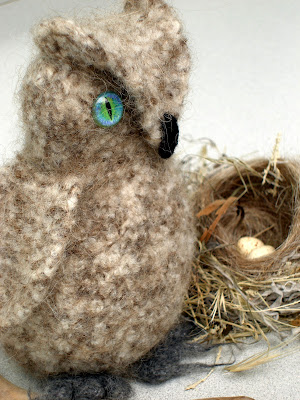 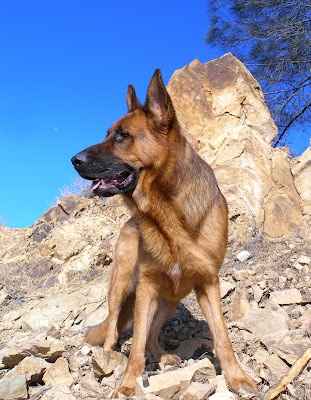 As much as I kid (sorta) about Simcha being a difficult dog, he is without question at least well socialized.  Steve and I have both made a huge effort to take him out and about around Topanga so he can meet and greet other dogs and people.  He not only goes on daily hikes but is also out and about around town.  So I was very amused the other day when Steve took Simcha into a local gift shop where the clerk exclaimed "I know that dog"!  He's becoming so well known around town we might just have to nickname him Mr. Topanga!

Until next time, be well and love well and may you have a wonderful Spring filled with bird watching and time spent enjoying nature.
Posted by Mr Puffy's Knitting Blog: at 11:01 AM 14 comments: