Last year I didn't knit any fingerless mitts and so I really needed a new pair this year.  Over the years I've knit many pairs of fingerless mitts but I tend to give them away or Steve commandeers them. Which is a really nice thing about them.  They are fast to make and everyone wants a pair so they make great gifts.  And at least here in SoCal the stores don't carry them which makes them a unique gift as well. 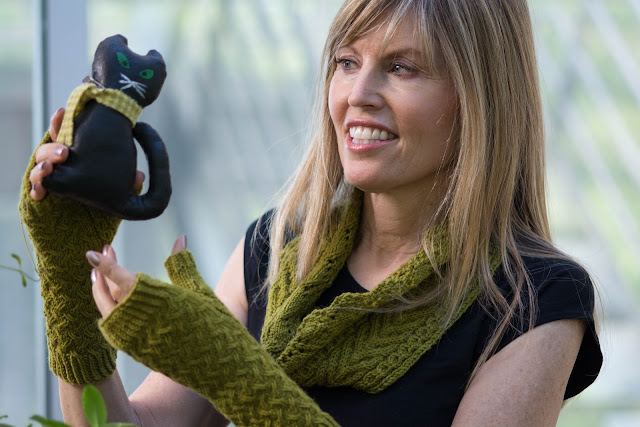 But this pair is definitely for me.  After all I have the matching cowl so I can't give them away!  They are knit in the same yarn but the patterns are actually by different designers although they do interestingly enough share common design elements.  I knit the cowl first. I loved the pattern and the backstory that came with it.  The designer was inspired by the Siskiyou mountain range which is one of the highest ranges between Oregon and California. Apparently after being caught on the wrong side of the mountain pass she was inspired to design this cowl decorated with diamond shaped edging reminiscent of the mountains; tire tracks plowing through the snow; and forked tree branches lining the way.

It was pure serendipity that the mitt pattern shared the same cabled edging running along the inner seam (the tire tracks if you will).  I purchased this mitt pattern last year intending to use a different yarn but after I finishing the cowl Steve suggested that I should use my leftover yarn for a pair of mitts. Which I thought was a very insightful suggestion for a non-knitter.  It's times like these that I realize he's paying more attention to what I'm doing or saying than I realize.  Note to self: you don't have as much privacy as you think when you live with someone. 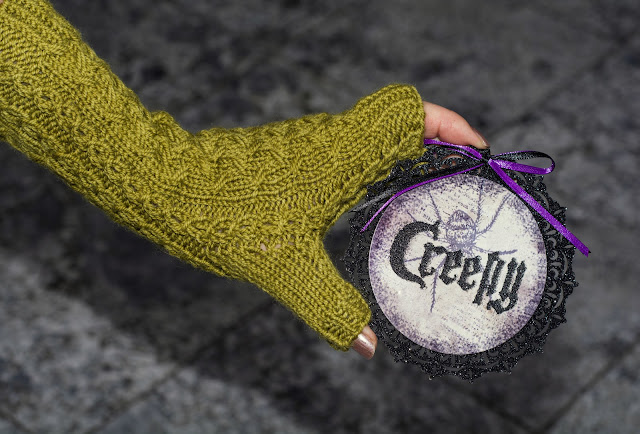 Work has been particularly beastly but I still made time to decorate my house for Halloween. I do have my priorities! From now until New Years our house will be decorated for the various holidays and I'm always sad when the last ornament is put away.  It creates such a fun and festive feel in the house when it's decorated and many of the decorations I've made myself over the years.  For example the cat I'm holding in the first picture is a "prim" a form of American folk art that I made a few years ago (blogged as An Accessory Shawl and Halloween Prims).  I love these little cats and they have held up really well.  If you are looking for a quick and fun Halloween projects I recommend exploring prims! There are lots of kits and project ideas on Etsy. And many of my past October posts have Halloween project and recipes ideas as well. 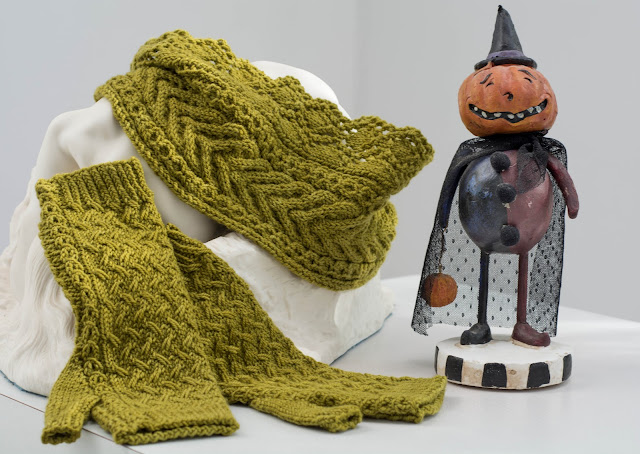 Cowl Particulars:  Siskiyou Cowl, designed by Kelli Slack aka: Knitter Bunny (Kelli Slack Designs); US 4 needles; 1.1 skein of Swans Island superwash sport yarn (colorway Pesto);  My only modification was to knit only 18 pattern repeats rather than 21 as I wanted a shorter cowl for this set. I love this cowl, yarn and colorway!  I purchased this is a kit from Black Sheep at Orenco a sweet LYS in Oregon with lots of kits and project ideas.

Mitt Particulars: Qwist Mitts, designed by Melanie Berg (a designer better known for her shawls); US 4 needles; less than 1 skein of Swans Island superwash sport yarn (colorway Pesto); I knit the small size and my only modification was to BO in pattern rather than follow the pattern instructions for BO (which resulted in a floppy edge). Wonderful pattern. 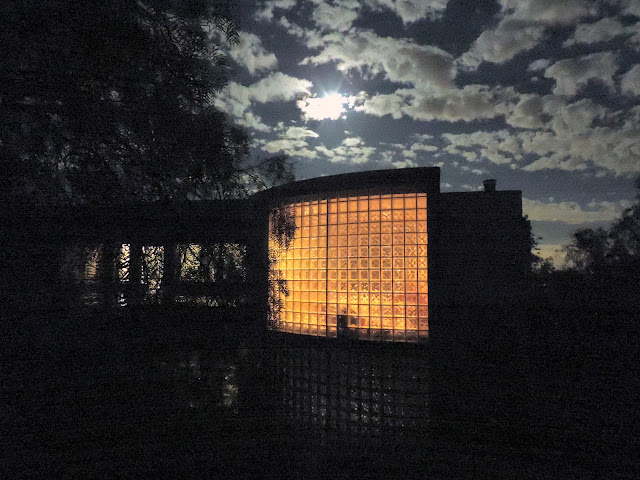 It's actually not a haunted house.  It's our house but I think it looks sufficiently creepy on a stormy night to be haunted!  Haunted or not with Autumn comes shorter days as darkness settles early and this makes it a wonderful time to be at home ensconced somewhere with a good book.  And a cup of tea.  And a freshly baked treat.  If that doesn't move you I recently read that good literature will actually increase your life span.  Whether or not that's true reading books will indubitably enhance your quality of life.  But the word "literature" packs a wallop as classic literature can be heavy reading.  By contrast trashy novels make such enticingly easy reads and can be consumed as quickly as a bowl of popcorn but never leave you satisfied.  Somewhere inbetween heavy literature and trashy novels is generally what I read. Right now I'm enjoying the Inspector Ian Rutledge series.  These are wonderfully crafted "who done it" mysteries.  I grew up reading Nancy Drew Mysteries and still remember the thrill of reading these stories late at night snuggled in my warm safe bed.  So it's not surprising that I still enjoy a good mystery.  The Inspector Ian Rutledge stores always begin with a leisurely unfolding of small details that finally add up to an exciting unveiling of the guilty party. Albeit sometimes the conclusion is a bit of a stretch.  But I can put that aside as I enjoy the process of reading the stories so much.  And I find the main character, Inspector Rutledge, very sympathetic. He's a shell shocked WWI vet who returns to England and attempts to resume his career as an Inspector at Scotland Yard while battling his own demons  He's a very real character and the stories give a personalized insight into the stress that good men and women are put under in the impossible circumstances of fighting a war.  My father fought in the Korean war in the trenches with great courage under sniper fire with his unit assigned the risky and hazardous task of advancing communication wire.  He was awarded the Bronze Medal for bravery in combat.  Remarkably he came home from the war and simply got on with college and rebuilding his life and starting a family.  And a kinder person you'll never meet.  Maybe it's that family history but for whatever reason I find war stories fascinating and this series provides an exceptional insight into the emotional price of war. 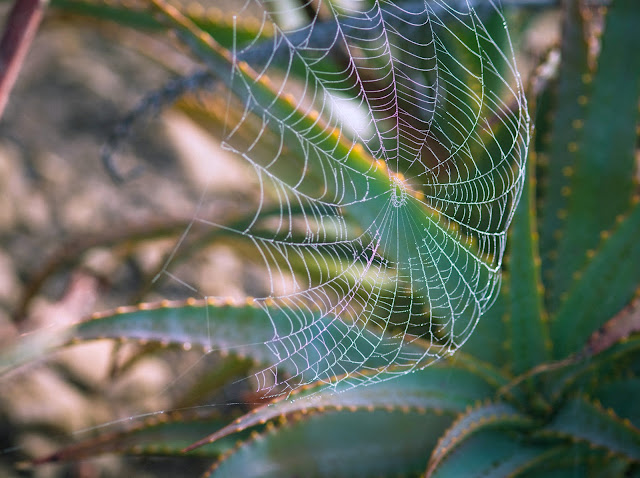 Until next time be well and love well and watch out for all things that creep, crawl and go bump in the night!