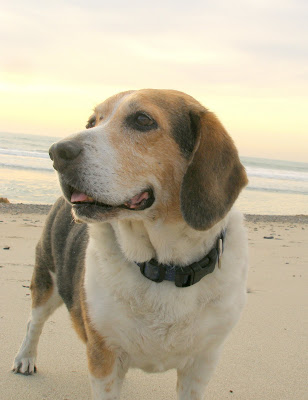 It is with great sorrow that I let you know that Mr Puffy passed away last week. Steve has written the following tribute to Mr Puffy's memory that we have shared with family and friends and I am sharing with you.

As you know, Mr. Puffy was on chemotherapy treatment as a result of his bladder cancer. His struggle ended last Thursday.

Puffy had a long and happy life until the very end. He was a source of joy to everyone he met.

There is much about Puffy that many of you don’t know.

Puffy was a rescue dog. He was unhappy in his early life and ran away from his first family in Indiana on a regular basis. He was shot by a farmer and had hundreds of pieces of buckshot in his body. Shortly after that we adopted him. We never knew about his injury until he had an x-ray that lit up with little luminescent areas from his head to his tail. We then called his first family and found out the whole story.

Puffy had an incredibly kind heart. Shortly after we got him he escaped from our housekeeper while we were at work. She chased after him, running through the woods until it became apparent that she couldn’t catch him (Puffy was fast). Out of desperation she lay down on the ground and started crying. Puffy heard her, stopped, came running back to her and licked her face. He was worried that she hurt herself.

Puffy had fans all over the world. As you know, he and Claudia shared a knitting blog and thousands of people enjoyed following his adventures and looking at the knitting. In just the single week from 1/21/2010 – 1/26/2010 he had multiple readers from the following countries visit his blog:

He was also honored by the Orange County Register with a story and photos about two weeks before he died.

Sample quotes from his fans:

1/24/2010 from Katherine: Mr. Puffy is a hero in our house! We are praying that our Jack Russell Terrier Macy will get along as well for as long as he has! Go Puffy!

1/20/2010 from Michelle (Northernstar28): Hooray for Mr. Puffy! Man about town. Ever so newsworthy and ready to put a bright spot in everyone’s day. Thanks for sharing the story and recipe. Worldwide humanity rules.

He got similar comments on a regular basis.

Puffy and Claudia enjoyed an English Tea every day from 1-2pm. Puffy waited for his little biscuits, enjoyed them and then lay down next to Claudia and watched BBC programs.

As Puffy’s veterinary office said, Puffy was a sweet, sweet boy who was loved by everyone he met. He is missed very much.

This blog was a journey that Mr Puffy and I began together and, at least for a time, I shall continue on in his honor. I think in my heart I'll always know what Mr Puffy would want to say.

Sharing and caring. Personal sacrifice. Kindness. Whether a tragedy on the magnitude of the Haitian earthquake or those smaller ones that take place in our own communities it is these attributes of the human spirit that bring people together.

I expect to pass through this world but once. Any good, therefore, that I can do or any kindness I can show to any fellow creature, let me do it now. Let me not defer or neglect it for I shall not pass this way again.

Spend an Evening in Chile and enjoy Chilean Pollo Arvejado

January is universally a cold and blustery month and a good time to share recipes for warm and delicious meals that bring comfort to a winter night.

Years ago when Steve and I traveled through Chile we met a young woman who was working as a hospital resident in the port city of Antofagasta located in the remote Atacama Desert. It is an extremely poor city which exists mainly to support mining and industrial work. Those few consumer goods available have their prices displayed in "layaway" terms (i.e. the price broken into monthly payments) even for common items such as shoes and clothing. The purchases we made came without boxes. At least those were the conditions when we were there in the mid 1990s.

Steve, who was a practicing physician at the time, saw this as an opportunity to share how medicine is practiced in the United States with someone just beginning her medical career in a disadvantaged area. So we invited this young woman, Annie, to stay with us so that she could get experience in the US and qualify to take US medical exams, which she did.

This was a busy time in our lives and we all were going in different directions but I did manage to corner Annie and get a few recipes and learn a little about her life during the time she stayed with us!

Annie loved drinking merlot wine and as you might know Chilean wines are excellent. From her stay, to this day, I have a preference for merlot and enjoy it best the way she taught me. Cooking for Chileans is a social time in the kitchen and wine is sipped and enjoyed during the cooking process. The wine bottle is placed on the stove top so that it warms and releases its fragrance to mingle with the food being cooked. I'm not sure what a wine connoisseur would say about this, but for a merlot I find it works really well. 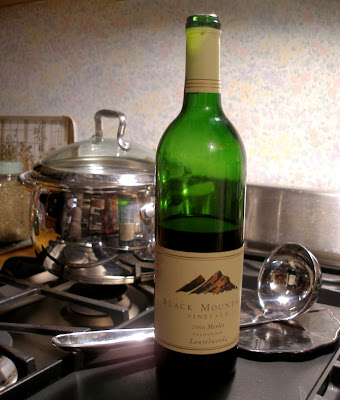 And this is one of Annie's recipes, Pollo Arvejado. In the past 15 years I've made this dish countless times and always enjoy it. I hope you will too.

2 Brown chicken pieces over a high heat in olive oil (Edit: use just a small amount of oil - approx. 2 tablespoons). When nicely browned, lower heat to simmer and add the diced onion, diced potato and grated carrot. Sprinkle with salt to taste. Cover and cook for approximately 1 hour, depending on size of chicken pieces.

3. Place on serving dish and add a few peas and garnish with parsley. Serving remaining peas as a side dish. 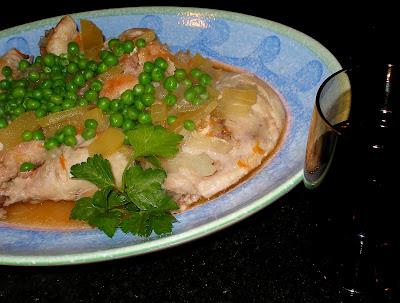 We are just so tickled, Mr Puffy made the news! You can see Mr Puffy in the Orange County Register here.

Until next time, be well, love well, and share this warm and delicious meal with your loved ones!
Posted by Mr Puffy's Knitting Blog: at 12:20 PM 25 comments:

He Said ~ She Said 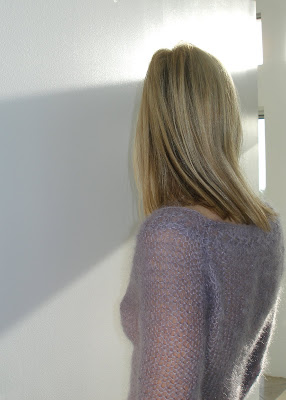 I showed Steve a picture of this sweater pattern and said - see - isn't it beautiful! I'm going to knit it with this fluffy yarn.

She Said: Nothing (she's a smart lady) and knit it anyway. Because it would feel good. 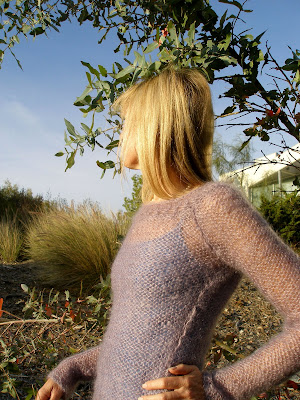 Therein lies the differences between the sexes. Most men are visually oriented and most women are feelings oriented. Even if I ended up looking like I was wearing something that the cat spat up I would be happy lounging about the house in it. Paramount to me is how will it feel. Will I like putting it on? Will I feel like flouncing about the house it in? Yes yes yes!!! I love it. I even think it looks good, but then I'm bias.

Between you and me, Mr Puffy had told me in private that he thought it would both look good and feel good. Mr Puffy has such good instincts. 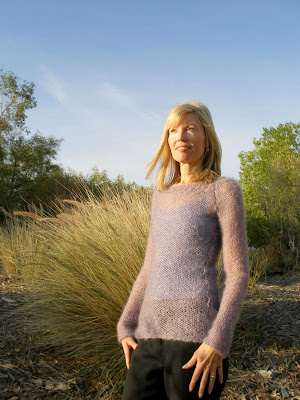 This is an extremely basic sweater design by Kim Hargreaves but she makes it special with two of what I think are her signature design features. Shaping and finishing detail. This sweater is designed to be form fitting with a relaxed yet elegant appearance. The elegance is achieved with the beautiful filigree neckline. 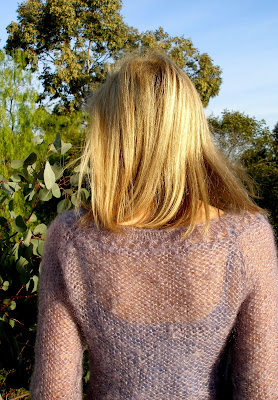 While it is a very basic knit, but there are several small things that I did to help the "finished" sweater have a polished look, rather than making me look like a purple polar bear. First, I ignored the advice to do a gentle steam block. Instead, I did a full wet block and while it was still wet I used my hands to press the fabric into a flat smooth surface. I did that several times during the course of the drying. I think this helped the fabric have a nice sheen, open the stitches, and lay flat. Second, once it was sewn together, I did a targeted steam block of the neckline to encourage it to lay flat rather than allowing the fabric to follow the natural roll of the stockinette. 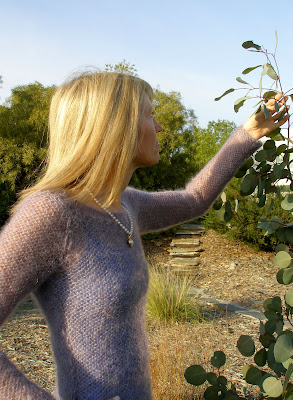 It's a warm material (heavy gauge mohair/silk) however the open stitch work keeps it light and comfortable to wear. Even here in sunny Southern California. 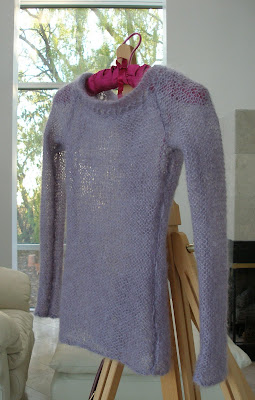 Mr Puffy is a miracle of modern medicine! He continues to bring joy and love into our lives. It's amazing how well he has responded to the chemo medication. I wanted to show you him running like the wind on the sand.... but it's hard to capture that. 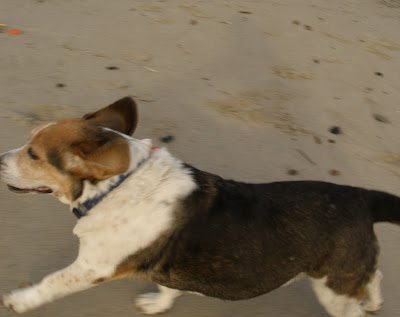 I do better with still life. 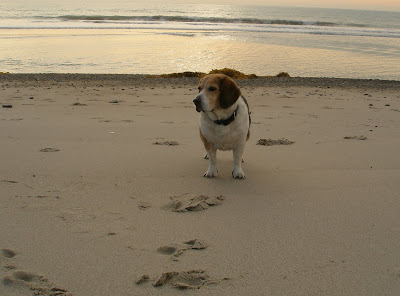 I hope everyone had a wonderful Holiday season and may I recommend Calm after the storm of activity. Whether your calm is a soft sweater or a nice cup of hot cocoa ~ enjoy. Until next time be well, love well, and happy knitting.