Israel and a Taste of the Middle East


It's been weeks since my last post so I'll quickly update you on what's been happening this summer. We have had both amazing highs and frightening lows.  The high point was obviously our trip to Israel which was amazing!  The low was my father being seriously injured in a fire that required him to be airlifted to a burn center here in Los Angeles which was a blessing as Steve (a retired doctor) was invaluable in making critical medical decisions that effected his recovery.  It's now six weeks since his injury and I am extremely happy to share that he is at home recovering and his wounds have almost completely healed. It's nothing short of miraculous and largely thanks to Steve's decisions and my dad's wonderful healing capacity. But a very stressful time as you can imagine.

As I promised in my last post I do have a wonderful vegetarian dish that I am dying to share!  It's a knockoff of a dish that I had while in Jerusalem that was served as a main course.  I enjoyed it so much that while in the restaurant I carefully and surreptitiously wrote down all the ingredients on a napkin sothat I could recreate it when I returned home. You might find that some of the ingredients are not your typical grocery staple but they all have a long shelf life and I think once you try this dish you will find that you make it over and over again. I know that I do.  It's also a great dish to have in your repertoire in this day and age when everyone is either a vegan, vegetarian, or some other enlightened or otherwise picky eater. 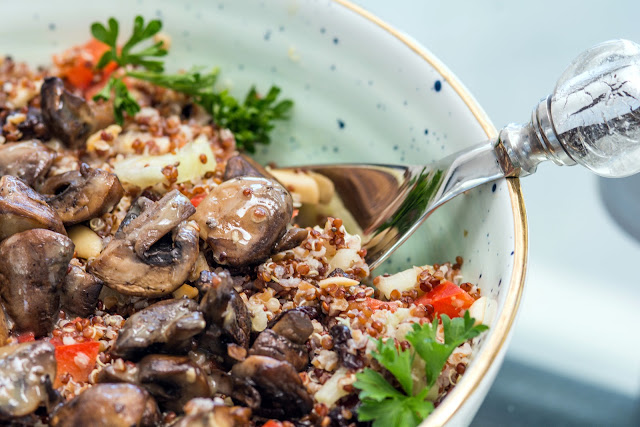 *For a Southern California twist try substituting 2 Tbs. sweet wine vinegar for the lemon juice and eliminate the added sugar.  It's a little pricey but I love using Blackberry Roasted Pepper Vinegar and use it on all my salads.

N.B.  There is a long soak period to soften the bulgar grain so I generally begin my salad preparation roughly 2 hours before I wish to serve.

1.  Cover raw bulgar in cold water and allow to sit at room temperature 1 hour covered.  Drain and set aside.  N.B. If you are using a whole grain bulgar it will take 1.5 hours up to 2 hours to soften. Parenthetically I prefer a cold soak to using hot water because it retains a better texture for salads, but you could always use the hot water method for a faster process if you prefer.

2.  Boil red quinoa in salted water for 15 minutes.  Drain and set aside.

3.  While bulgar and quinoa are being prepared chop celery, cranberries, red onion (or red sweet pepper) and quarter mushrooms.  Set aside.

4.  Toast almonds in a dry pan until slightly browned and fragrant.  Set Aside.

5.  Saute mushrooms in 2 tablespoons olive oil until soft and cooked through, then season with coarse kosher salt.  Set Aside.

6.  Prepare dressing by combining all ingredients in a small jar and shaking well.  Set Aside. Incidentally this is a lightly dressed salad.  If you prefer a lot of dressing on salads you might want to consider doubling the dressing and adding to taste.

7.  Prepare Salad by combining all ingredients except mushrooms and dressing.  Add dressing to mixture retaining 1 tablespoon and mix well.  Sprinkle mushrooms over top of salad and drizzle with remaining tablespoon of dressing.

8.  Serve at room temperature either as a main course or as a side dish as I typically do. 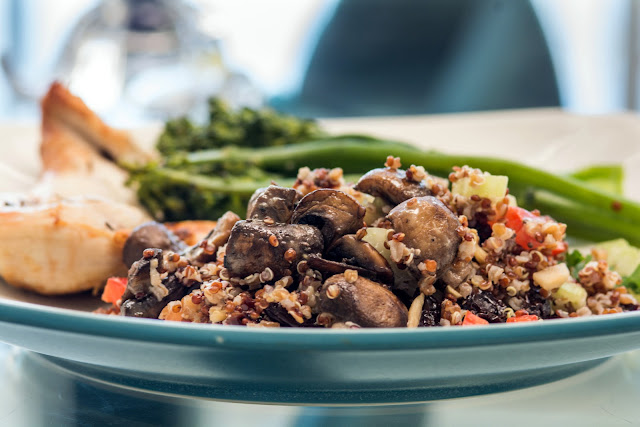 Of all the amazing places that we have traveled and sights that we have seen Israel is my favorite for its religious and historical significance are truly awe inspiring.  And the food is pretty delicious too. Which I always count as a positive for any vacation destination.  As a preface we went as tourists and not as pilgrims. This means that we saw and explored everything from the formation of the modern Israeli state to cultural and archaeological sites and both Jewish and Christian holy sites and never had enough time at any one location.  Our trip left us exhausted and profoundly impacted by our experience.  Someday I would like to return as a pilgrim and stay just in the old city of Jerusalem. 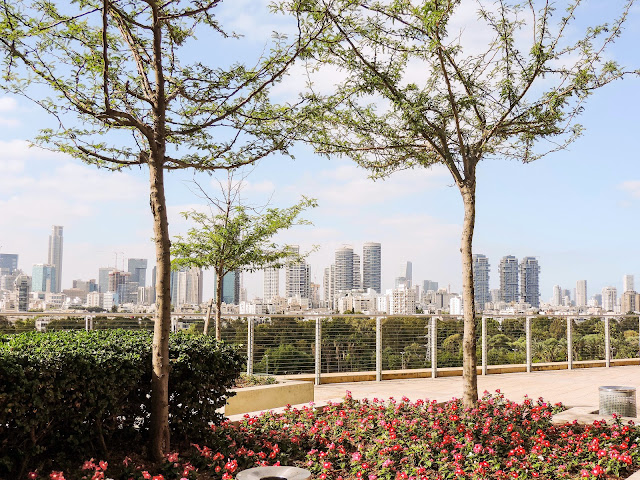 We began our trip in Tel Aviv which is a vibrant modern city (as seen above) with a young population and a liberal culture self described as Jew-ish, i.e. the residents identify themselves as Jewish but they pick and choose the commandments they follow.  For example almost everyone has a tattoo which are forbidden in the bible.

The food is also outstanding in Tel Aviv (and throughout Israel).  Both at hidden away bakeries and the famous spice markets.  I'll never forget the incredible savory bourekas I had in Tel Aviv made with hand pulled fillo dough.  They were melt in your mouth delicious and just the memory makes my knees go weak. It even crossed my mind that I should learning how to make hand stretched fillo dough. But then I realized I wasn't insane. So I'll be sticking with frozen fillo dough.  Warning. There are potato bourekas pictures below. 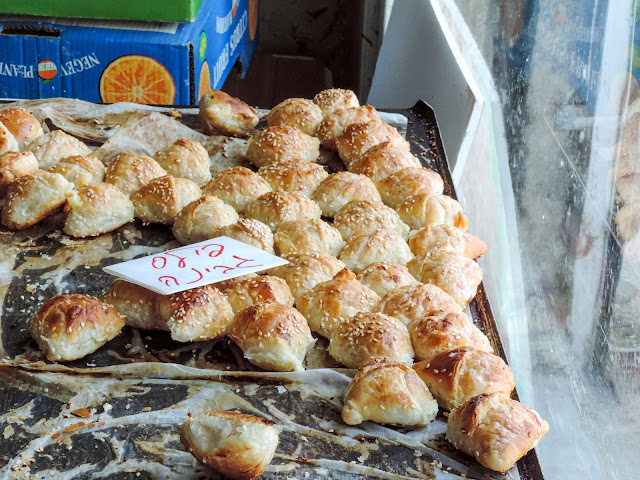 I did come home with a variety of spices from the markets and in particular I love Zaatar (a blend of hyssop, toasted sesame seeds, salt and lemon) that is use as a dipping spice for bread.  I like it on my morning toast drizzled with olive oil for a savory start to my day.  I find it strangely addictive. Traditionally it's a topping for pita bread although I first tasted it as a dry rub on a Jerusalem bagel in the old city of Jerusalem.  Which reminds me, definitely add eating a Jerusalem bagel to your to do list. 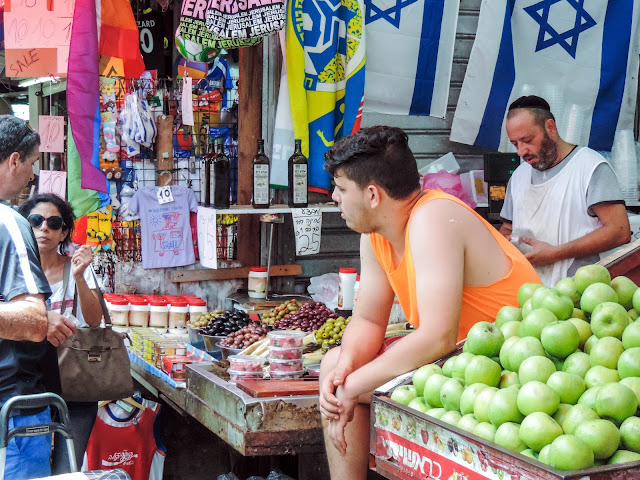 But our trip wasn't just about the food.  We visited incredible archaeological sites including the ongoing excavation site commonly called Abraham's Gate at the city of  Dan.  It's called Abraham's Gate because Dan is the city where Abraham rescued his nephew Lot and both Abraham and Lot would have walked through this arched gateway to enter the city. 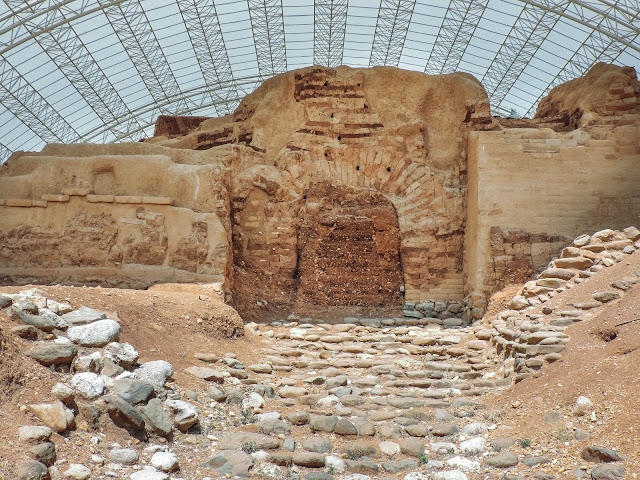 And of course we visited many Roman sites including Harod's Palace and the Roman theater in Caesarea where Steve and I sat on on the public toilets located near the entrance to the amphitheater. But don't let Steve holding his nose fool you.  These toilets are no longer used by the public.  I can not even imagine anyone thinking it was a good idea to have open air public toilets where people entered and exited the forum.  Although you do need a bathroom at public events. To think I am squeamish about pit toilets which are at least private. 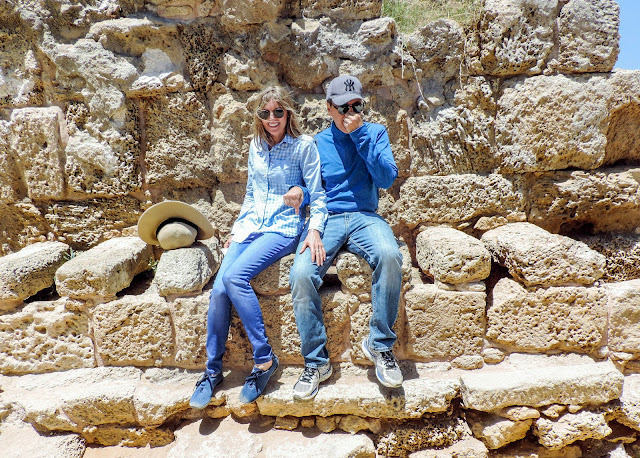 The Golan heights was another interesting place to visit.  We took a guided jeep tour up to the Syrian bunkers where troops used to snipe at the Jewish settlers in the Huleh Valley below until Israel seized this area in the Six-Day war in 1967.  You can see from the bunker pictured below that the Syrian bunkers were well camouflaged and it was only through the intelligence of an Israel spy who infiltrated the Syrian army that Israel was able to pinpoint the exact location of these bunkers and was quickly able to neutralize them.  The story of this spy (Eli Cohn) is told in the book Our Man in Damascus written by Eli Ben-Hanan. Eli Cohn was eventually captured and hanged for espionage by the Syrians. 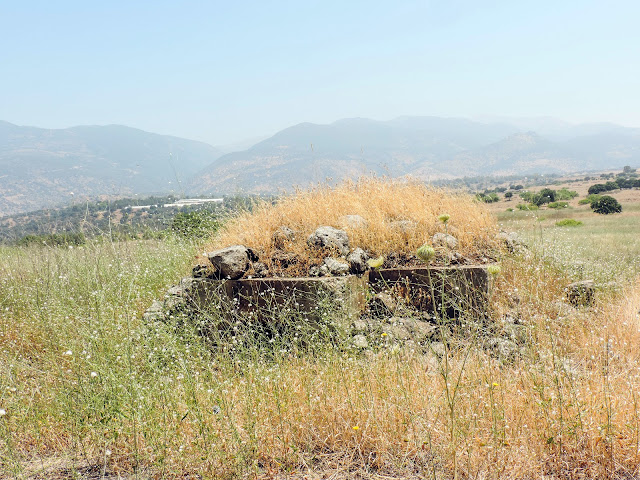 But for me, a Christian, the most significant and profound experience was to visit the places where Jesus lived and performed his miracles including the miracle of loaves and fishes, walking on water at the sea of Galilee, and where he gave the sermon on the mount.  In the old city of Jerusalem we visited where the Last supper is believed to have been held, King David's tomb, the Western Wall and the Jewish quarter. But without a doubt the most significant experience of the entire trip for me was visiting the Church of the Holy Sepulchre in Jerusalem where Jesus is believed to have been crucified.  To actually place my hand into the rock where Jesus was crucified and to think what he suffered for humanity was very emotional. The picture below was taken while waiting in line and shows the wall hangings above the rock where Christ was crucified.  The Holy Sepulchre is also believed to be the site where Christ was buried after being crucified and rose again. 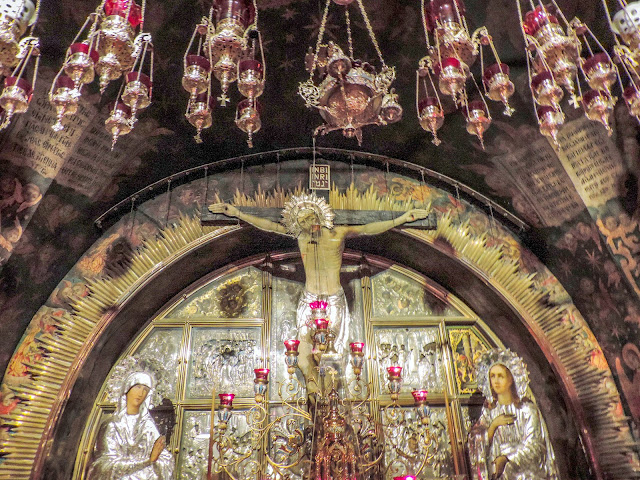 As you can tell we had a once in a life time experience.  If you are thinking about visiting Israel we have only the highest praise for Arza World tours and our guide Yishay Shavit who was incredibly knowledgeable, humorous, balanced in his opinions, and someone you would want to entrust your trip and safety to.  Yishay is an independent tour guide and leads tours all over the world.  Our trip was organized and led by our Chazzan Danny Maseng and his lovely wife Terry Maseng through Makon LA and next year they plan on leading a tour through Spain.  Non members are welcome and all faiths are included!   Lastly here's a picture of me looking very much the tourist in Tel Aviv and I hope to be a tourist in Spain next year too. 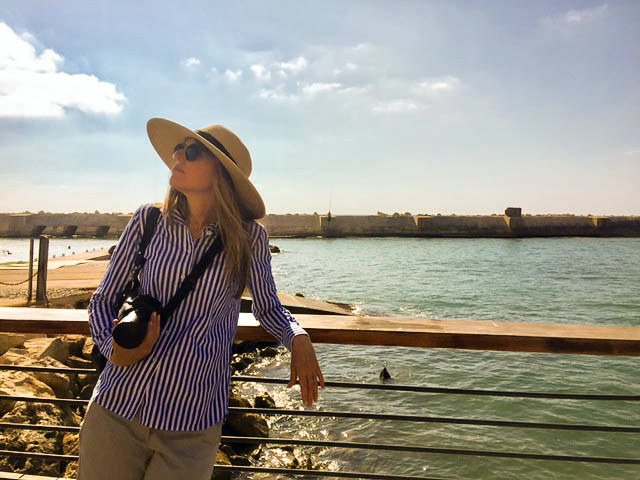 Until next time be well and love well.  Already my thoughts are turning toward Fall and I'm getting excited to share the knits, flavors and holidays of this my favorite of all seasons!
Posted by Claudia Bugh at 2:27 PM 9 comments: