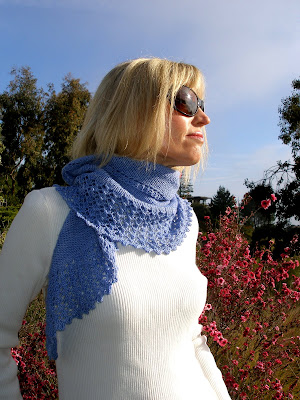 As a child I was brought up on a steady diet of nursery rhymes and stories of magical creatures.  As a result I have had a life long love affair with all things fairy.  This shawlette is dainty enough to remind me of frilly mushrooms and clothing made from cobwebs and flowers and something a wood nymph might chose to wear.  Ethereal and fun. 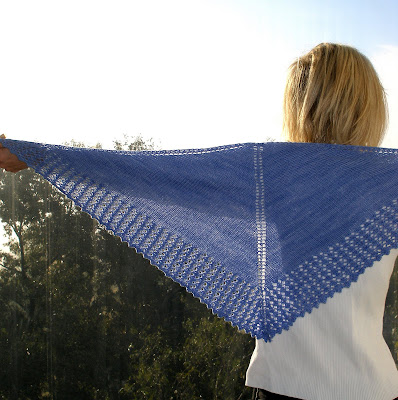 Speaking of magical creatures, I'll share with you one of the nursery rhymes that my maternal grandmother used to recite to us well into her dotage, complete with acting out the various characters.  The Selfish Goblin (author unknown) as told by Mary Cunningham (1902-1982) who learned to recite this and many other rhymes as a child growing up under the care of a nanny in turn of the century England:

Upon the open moorland, the rain was falling fast,
and through the dripping heather a goblin hurried past.
His eyes were small and cunning, his hair was very red.
He had a green umbrella he held above his head.

He chanced to meet a fairy, whose clothes were very wet.
As she had no umbrella he wished they hadn't met.

Oh please will you allow me, the little fairy cried, to share
your green umbrella by walking by your side.  I wandered from the pathway
as I was going home.  Oh dear, oh dear,
I'm frightened, don't leave me all alone.

Puff, nonsense, said the goblin.  Can you not plainly see,
that under my umbrella there's only room for me. Goodbye.
And off he went, his clothes completely dry.  And left that little fairy
to sit alone and cry.

But, as he crossed the moorland the wind with angry din,
caught hold of his umbrella, and turned it outside in.  Hooray! Exclaimed the
hedgehog.  I am extremely glad.  Now I know a clever way to make old
umbrellas new.  I wouldn't dream of telling it to you.

So he rolled the goblin over and then he hurried back, to help that little
fairy upon her homeward track.  And left that selfish goblin struggling
with labor vain to mend his green umbrella, which let in all the rain.

It's interesting how something like a nursery rhyme can become etched into one's subconscious.  In our family whenever anyone is being selfish they are referred to as being a greedy goblin.  Steve hears this on a daily basis but never changes his ways. 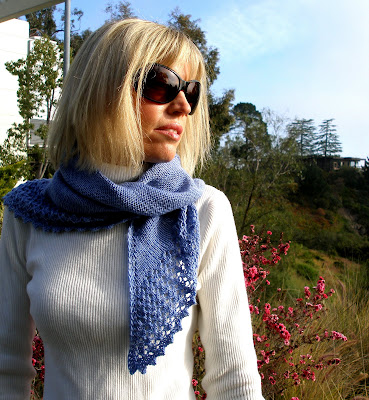 Particulars:  Crashing Waves by Grace Akhrem; 1 skein Tosh Merino Light (100% superwash merino wool); fingerling weight; colorway: Blue Gingham; US 6 circular needles; size small as modified by 3 extra repeats (189 stitches).  As a result of adding 3 extra repeats my bind off is not centered but that is fine with me as I generally prefer a more rounded shape at the point of a triangle shawl anyway. Merino wool does not hold a block very long and will substantially "relax" post blocking.  The pictures in this post are relaxed post-blocking; final measurements 44" x 18." 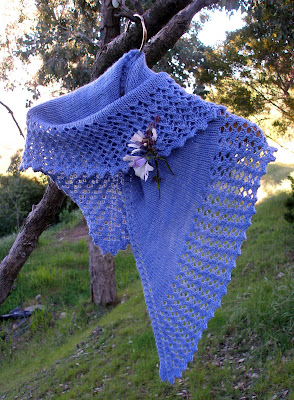 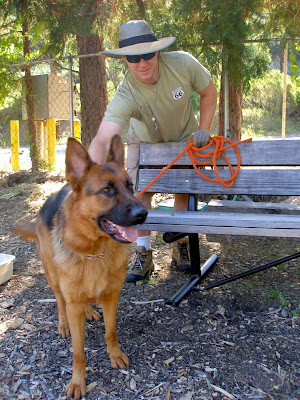 It is the start of snake season here in Southern California and since we live in an area with lots of rattlesnakes we took Simcha to be rattlesnake trained. It involved exposing him to rattlesnakes both with and without their rattle so he leaned to avoid their sound and smell. The trainers used a shock collar and I know it made an impression.  Regardless, for safety reasons, Simcha's walks will be on-leash until the weather is cool again.

I was touched afterward when a little girl came over and put out her hand to Simcha and he licked her fingers.  She asked me “does he rescue people?”  Considering how hard we worked to socialize him this made me feel very proud.  I smiled and told her I was sure he would.

Until next time, be well and love and well make yourself something ethereal and fun to wear!  There are lots of free shawl patterns to choose from including Bitterroot, Annis, Citron, and Springtime Bandit ~

A Blue Bird ~ In Wool Felt

One of my favorite things about Spring is the sound of birds chirping to greet the day. 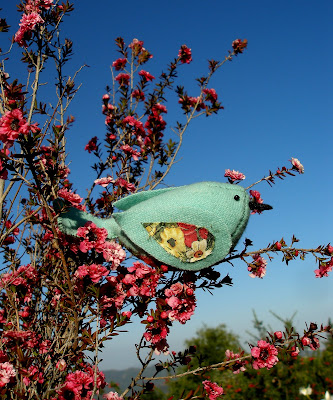 Every morning Simcha and I take a long hike in the beautiful Santa Monica mountains where I allow him to run off leash and we enjoy a time of peace and quiet before the daily activities begin.  I'm quite certain that for Simcha his favorite part is either his romp in the pond or collecting sticks.  But for me it is the sound of birds chirping all around us. 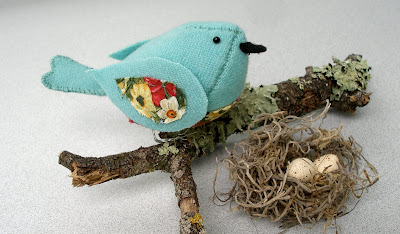 During our walk I try and put everything else out of mind except the sound of the birds singing.  I listen to the birds, enjoy the scent of earth and plants warmed by the sun, and take deep breaths.  If I have a few extra minutes I will sit and watch as Simcha plays nearby.  I find our walks especially soothing when the aggravations and stress of work are exceedingly burdensome, such as they are now. 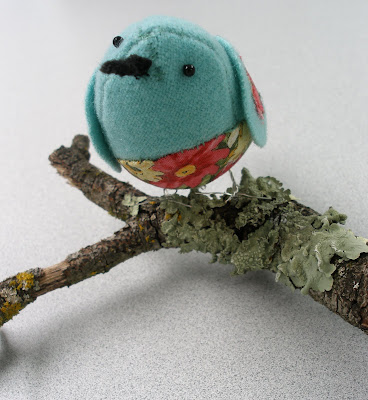 It is my favorite time of the day and perhaps that's what appealed to me about this little bird.  I only wish he could sing.  It makes me smile seeing him sitting here on a twig collected by Simcha on one of our walks. 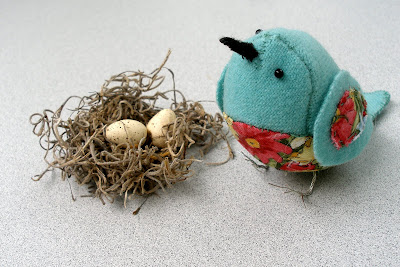 Particulars: Pattern by The Paper Shed (The Curious Robin); hand dyed wool felt by Quilting Acres which was a good choice for this pattern as it's soft and very pliable; a miscellaneous fabric quarter; polyester fill (used to stuff all my toys); beads for eyes; and crafting wire.  This was a very fun and easy pattern to follow and I'm sure I'll make many more of these little birds.  N.B.:  This particular little bird has not been the same since a traumatic incident when he was almost swallowed by Simcha.  Something about his little legs has not been quite right since and is by no means a reflection on the pattern or design. 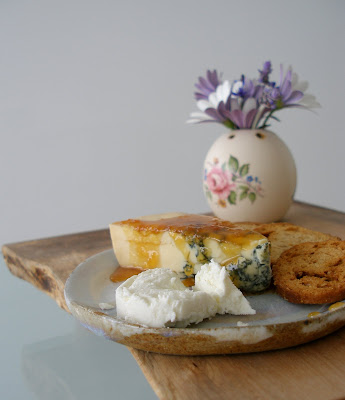 I generally have something sweet with my afternoon tea but occasionally I enjoy a savory tea instead.  This is a plate of goat and stilton cheese with honey drizzled over the top along with crackers. It makes for a nice change of pace.

Until next time, be well and love well and take a few minutes in your day to find a quiet place where you can close your eyes and listen to the birds singing.  You will be glad you did.
Posted by Mr Puffy's Knitting Blog: at 1:50 PM 27 comments:

When Hilary (The Yarniad) announced she was having her first baby I was so happy for her I just had to knit the baby a sweater.  And in the process of knitting the sweater I thought about the things that I was given as a child that I have kept through the years. 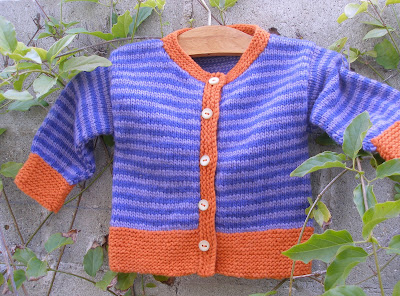 To welcome the wee cherub sent from heaven to you ~
may angels stand guard over Claudia Jean Bugh*.
With a heart sweet and pure from the good Lord above ~
she enters your home to be loved and to love.
Her hours are all yours to guide day by day ~
he's lent her to you ~ keep her close in his way.
Heavens minus an angel, she's down here with you ~
your own little daughter ~ Claudia Bugh.   By Fay Angus

I'm no angel but perhaps I'm better than I would have been but for the prayers of some wonderfully caring people.  Not all babies are so fortunate to have the support and welcome of an extended community but all deserve that and more.  It is with a warm heart that I welcome Hilary's baby and hope that he may always know that many care about his well being.

But you want to hear about the sweater.  Isn't it cute?  Now I know it's not a traditional style for a baby but I just love the bright colors!  And think how handy this will be for watching the toddler.  Hilary will be able to pick her baby out of a crowd with no difficulty at all.  Practical.  That's me. 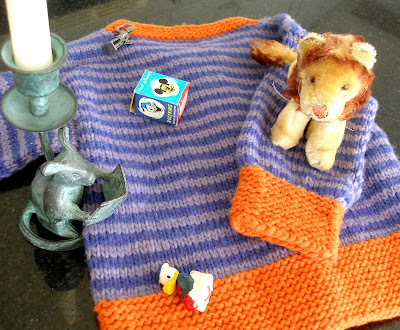 The buttons are vintage Le Chic that came from a pound of buttons that I purchased in a destash sale on Etsy by Lil Fish Extras.  Pictured below are just some of the many other buttons included in that pound along with a clever broach made using buttons, felt and crafting wire.  It's amazing how many cute ways something as common as old buttons can be used in crafts and if you are not already familiar with Lil Fish Studios you will find many project ideas on her blog for buttons and beyond that are sure to inspire you!

Particulars: Classy Baby Jacket (a Morehouse Farm kit); US5 and US6 needles; 3 skeins Morehouse Merino 3-strand worsted yarn.  I found this to be a straight forward pattern and easy to knit project.  I used US 5 needles for all trim (areas knit in orange) and US 6 needles for the body of the sweater; size 4 month to 1 year. The Grumperina sells a similar baby sweater but with a zipper closure called Budgie Baby Sweater that is also very cute.  I enjoy knitting with Morehouse Merino yarns which are a nice combination of sturdy and rustic but still soft and warm.  I used this yarn to knit the Lily Chapeau Hat a few years back and it has held up very well.

Updated!!!!  I was absolutely thrilled to receive some pictures of the small child wearing this sweater and I'd like to share one with you ~ 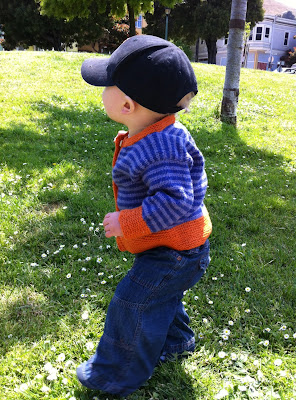 I can't tell you the joy it brought to me to see him wearing his sweater!

The Misadventures of Simcha 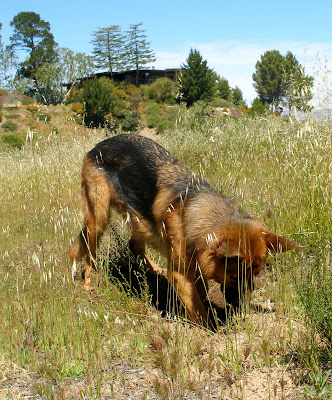 And for those of you wondering how dear little Simcha is doing..... here he is busy digging a hole in the backyard.

Until next time, be well and love well and never forget that it is the gift of caring for each other that is the most precious and lasting gift of all.
Posted by Mr Puffy's Knitting Blog: at 7:51 PM 25 comments: