We're in the Pink 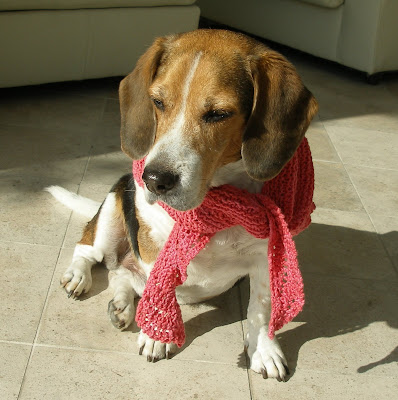 We’re in the Pink! Actually, I’m in the pink and Mr Puffy is in the watermelon, as I’ve explained to him several times now. Watermelon (the color of his favorite fruit) is a simply smashing color on him and I think this look gives him that certain preppy air. In fact, I was just saying to Steve the other day that I though school (obedience school, that is) might be a good idea. Can’t you just see Mr Puffy on campus? Regretfully, Mr Puffy is not the studious type and it might require a substantial donation for this to happen. On the other hand, he is quite athletic and might qualify for some type of sports scholarship. Oh well, it was just a thought and in any event the idea was not well received by Mr Puffy. 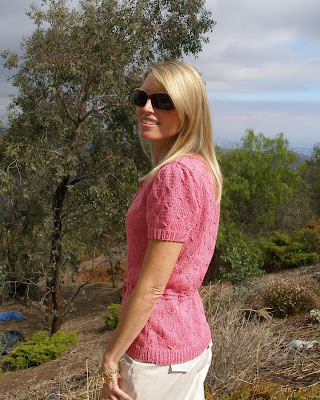 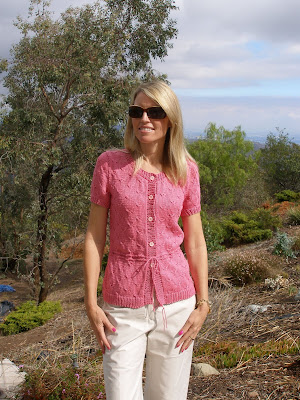 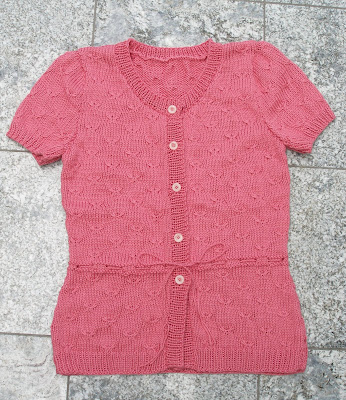 Mr Puffy is wearing a Fiber Trends Versatile Scarf knit with Manos Del Uruguay, Cotton Stria and I’m wearing Cherry by Anna Bell knit with Classic Elite Yarns, Premiere (pima cotton/tencel). Cherry was a fun knit except for the finishing – but then I never enjoy the finishing work. Frankly, the jury was out on this project until the last seam was seamed.
Two reasons why I wasn’t sure this would fit until the very end. First, I wasn’t knitting to the pattern gauge because I preferred the look of my swatch on US 6 needles even though I should have gone down to US5 to “get gauge.” Second, with cotton you have to wash and block your swatch to really know what your final gauge will be as cotton relaxes and expands when washed. Due to these factors, I actually knit this sweater to a size smaller than what the pattern was written for and I really didn’t know if my adjustments would work.
P.S. After reading some of the comments I realized I never said whether I liked Cherry or not! Yes, I'm very happy with the finished result - I'm just experiencing a little "post seeming" blues that apparently came through in my post. It's a well written pattern and has that magically quality where it looks flattering on everyone who has knit it!
Posted by Mr Puffy's Knitting Blog: at 3:15 PM

Beautiful - both of them!

I think Mr Puffy could easily be BMOC (BDOC?) - I think the girls would love him, and the boys would want to be him! :-)

I'm impressed at your perseverance with your sweater; it certainly turned out to be worth the effort.

Cherry turned out great!! I can't tell - are you pleased?

Cherry is beautiful- glad to hear you are happy with it. Nice job!

Mr. Puffy looks so cute in this picture, or might he be a little ashamed, because he has to wear a pink scarf?
Cherry looks perfect on you! :o)

You & Mr. Puffy look so pretty (& handsome in Pink). Great work on both.

Both you and Mr. Puffy are rocking your pink knitted goodies! Your perseverance with the finishing gives me hope that if I ever finish my sweater, it will be worth the trouble because Cherry definitely was.

I think Cherry looks marvelous on you! Great color and fit. Are you happy with it?

Very pretty! You did a great job!

This is very pretty!