Resolutions and All Things Brioche 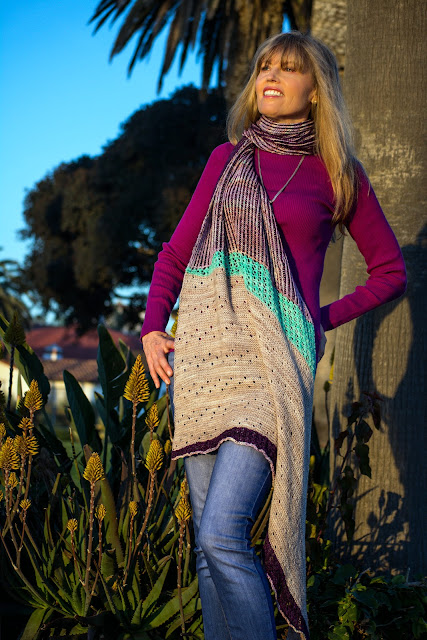 It wasn't just because there were a number of shawls that I wanted to make that use this stitch.  It was also that I didn't feel I would be a complete knitter until I had mastered this stitch.  And it's not like I woke up last New Year's and decided I wanted to learn the brioche stitch either.  I had attempted it several times over the years and not succeeded.  For whatever reason this stitch befuddled me and simply watching free youtube videos and tutorials wasn't making it any clearer. 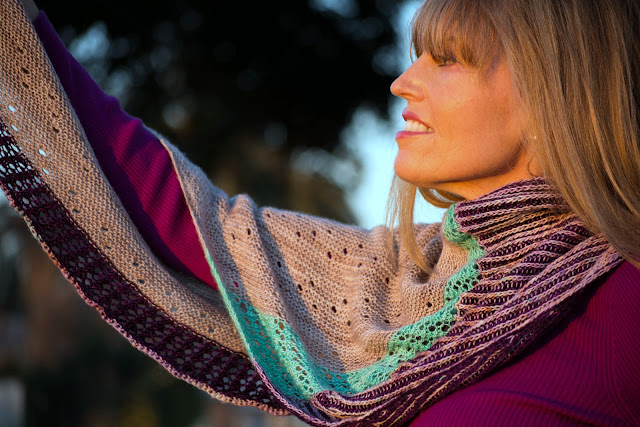 So in 2017 I bit the bullet and signed up for a paid Craftsy class!  You have to understand this was a huge mental shift for me.  If there's a free option online then I'm not interested in paying.  For example I would never pay to blog as I get the blogger platform for free.  I'm also not interested in making money from being online either so I guess there's some symmetry there. But as I mentioned I had already gone the free route with this stitch and that had gotten me nowhere.   I turned to the mega online craft class retailer Craftsy and settled on Explorations in Brioche Knitting with Nancy Marchant, who is a renown brioche guru.  And if you are going to learn anything it's best to learn from the best. Especially if you are going to be paying.  And I am delighted to report that this class did the trick for me.  I began with lesson one and worked through the modulus and wallah the brioche stitch wasn't nearly so complicated as it had previously seemed.  I guess sometimes it does pay to pay. 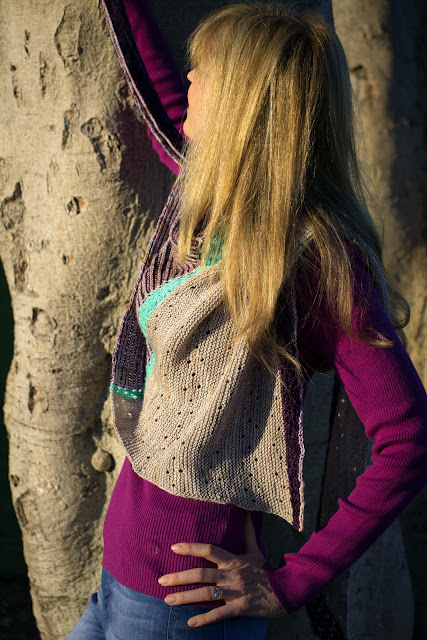 After all that I am particularly delighted to start 2018 by sharing my very first two color brioche shawl!  This pattern is a combination of both brioche and lace stitches and if you look at the picture below you can see the brioche portion is the purple segment which gives the fabric depth and a beautiful tonal effect.  I am not going to lie though the shape of this shawl is awkward and highly asymmetrical.  I would not consider it an everyday shawl but if you want a statement piece then this is the ticket.  All in all I'm thrilled to be wearing it and as a bonus I can call myself a master novice brioche knitter at last! 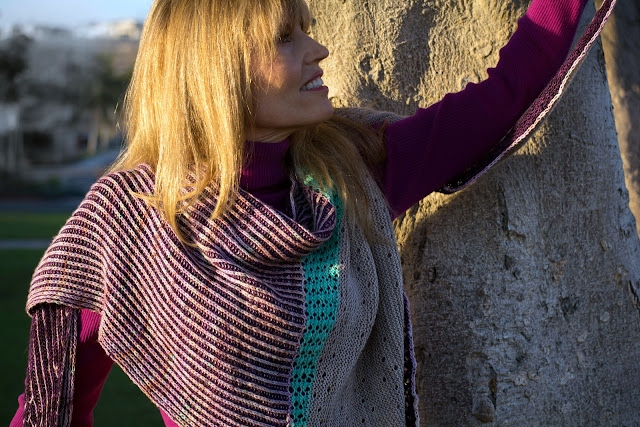 Particulars:  Parlour Shawl designed by Leslie Anne Robinson (Knit Graffiti Designs), la Bien Aimee skinny singles 1,100 yrds (yarn purchased as a kit); US 4 needles.  I only made a couple very small modifications to this pattern. Because I felt leaving the eyelet of the pattern repeats looked unfinished I closed that eyelet and to make up for the extra decrease I threw in another edging increase. The other modification was to the BO.  Three quarters of the way into the BO I realized that the edge was rolling and hiding the contrasting color so I ripped back and knit another row to create a garter stitch edge.  Then, instead of turning my work I simply slid the stitches to the other end of my circular needles (so the right side was still facing me) and BO in contracting color yarn.  This eliminated the rolling and emphasized the contrasting color.

To see a project that incorporates just a single color in the brioche stitch see my post with a photo of Stephen West's Marled Magic Shawl (the brioche is the grey portion) which also gives wonderful depth and texture to your fabric.

Incidentally I found baking brioche to be easier and oddly satisfying in light of having failed at the stitch.  I use Le Pain Quotident's Brioche recipe from their Cookbook.  They do have a free version of their brioche recipe online but it uses very different measurements from the book and I can not vouch for it (nor are the ratings for that version very high) but if you are interested here's the link brioche recipe. 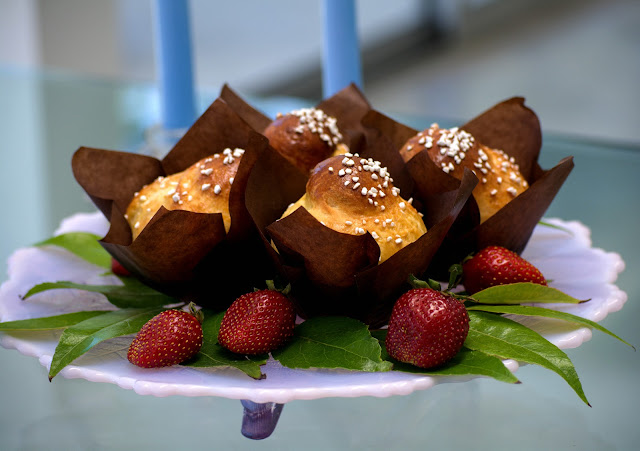 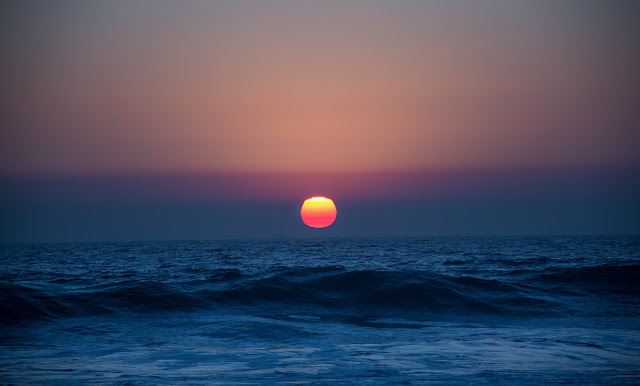 After the wildfires and a very stressful start to the holidays we were fortunate that things quickly turned around and returned to normal.  The Thursday before Christmas evacuation orders were lifted in Santa Barbara and my parents were allowed to return home and I joined them to help get the holidays back on track.  A few days of dashing about and decorating the tree, shopping, and hanging the lights and we were able to enjoy one of the nicest Christmases ever.  Afterward Steve and I headed to San Clemente to spend a few days relaxing at the beach as we always do the week between Christmas and New Year.  Watching the sun glide below the watery surface is so beautiful and relaxing and one of my favorite parts of staying at the beach.  Except when I'm not paying attention and a rogue wave wipes me out as it did while I was taking this picture.  Yet looking back at the picture I can say without hesitation worth it.  Even if I still have Sand in my Shoes.

Until next time be well, love well and may 2018 bring health and happiness and successful brioche knitting to all!
Posted by Claudia Bugh at 10:04 AM

Your shawl is gorgoeus. So glad your parents were able to return home and that you were able to relax and have a wonderful Christmas. That sunset is so beautiful. Happy New Year.

Oh yeah, those rogue waves will get you every chance they can! At least it didn't wipe out your camera :)
I am so thankful your parents are safe and their home is still standing. The Thomas Fire has really been something...
Happy New Year to you! Knit on, brioche knitter!

So glad your parents’ house escaped and you had a proper Christmas, Claudia. Your shawl is stunning and looks like it gave you plenty of practice to become an expert. Do you feel like you might knit another one? Chloe

Congratulations on the brioche breakthrough! It’s one of my favorite knitting techniques, stitched, etc.

Oh, you're going to have so many great shawl pattern options now that you've mastered the art of brioche!

Thank you so much for your nice and thoughtful comments!!! It's been a busy reintroduction to regular life and I'm still catching up. Chloe I would not re-knit this particular pattern because as I mentioned it's too asymmetrical for my taste but I'm glad that I have this one because I'm sure they'll be an occasion when it will be prefect to wear. I will definitely knit another brioche project but I won't use skinny singles to do so. For my taste the skinny singles don't have enough "squish" factor to create a comfy brioche fabric. In fact skinny singles are off my list for knitting these days but I could be tempted again because they do take color beautifully. I hope you are staying warm and safe. It's shocking to see the storms taking place on the east coast while we are still await our first drop of rain. Happy knitting ~

I've never had a hankering to learn the brioche stitch. Someone in my knitting klatch was attempting it. I think she figured out the stitch but gave up on the pattern because she didn't like her own color choices. It appears the the color selection is critical to how it all looks, but I wouldn't know :)

Oh your stunning shawl has just inspired me to learn brioche. I especially love your color selections for that shawl- it is beyond gorgeous.
Good news that your parents have been able to go back home.
Thank you as always for the recipes. You are so thoughtful!