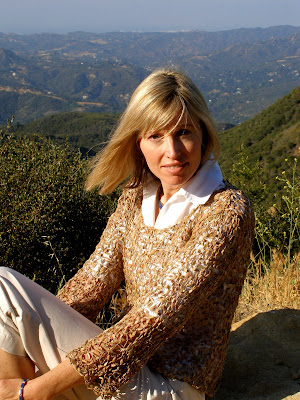 Knitting does not have to be complicated to give dramatic results. You can achieve a designer look by simply using unique fibers in an unexpected way. The tunic that I'm wearing is a great example of a simple knit that creates a high impact look. 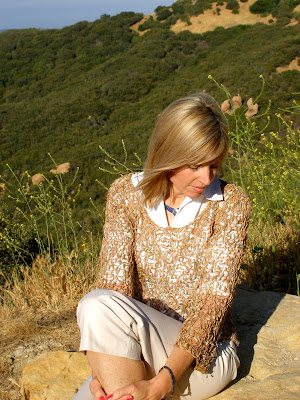 My tunic is knit with a unique fiber composed of stainless steel and cotton that is manufactured by Artfibers in San Fransisco, California. I first saw a shell top knit with this fiber by the other knitting Claudia (Claudia's Blog) and was inspired to give it a try myself. Parenthetically, besides a similar taste in knitting, the two of us share much in common including the profession of attorney at law.

The unique look to this tunic is achieved by knitting the yarn on larger needles than the recommended size to give it an open flowing look and keep the fabric lightweight. Due to the stainless steel content of this yarn I was concerned that a more dense fabric might prove uncomfortably heavy. As it is, I have a new appreciation for those medieval knights wearing metallic armor. 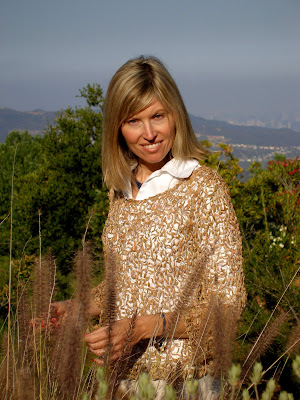 I love the way this tunic came out ~ it isn't really heavy ~ I was just kidding about that. In fact I feel rather swanky when wearing it. It puts me in mind of the time an opposing lawyer told me that she saw me sashaying about at the courthouse. Me? Sashay? Well, maybe once or twice. It's all about attitude, baby. 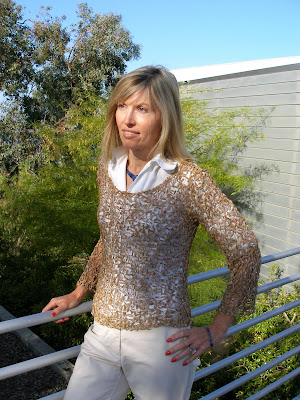 To knit yourself a simple summer tunic you simply have to find a beautiful yarn and swatch on over sized needles until you find a gauge that gives you the appearance you want. The tunic itself has only rudimentary shaping involved. The only knitting trick to working with an uneven yarn such as this is the need to iron the fabric pieces. Typically I just hand wash and flat block my knits. However, when using a yarn such as this, it is best to iron the pieces. Ironing will flattened out the fabric and gave it a nice, crisp, clean, finished look. When you use an iron don't forget to cover your knitting with a wet towel to protect the yarn and to first test a small scrap of yarn to make sure it won't felt with the heat. 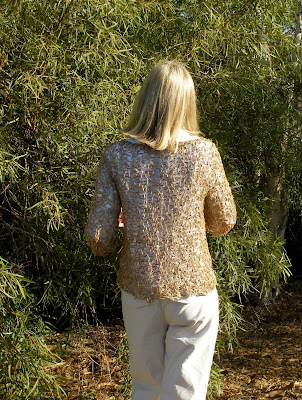 By the by, these pictures were taken in Topanga, California. For those with an observing eye, the necklace and bracelet set I'm wearing is lapis lazuli which I purchased many years ago while visiting Santiago, Chile a region know for this stone which is mined in the Chilean Andes. 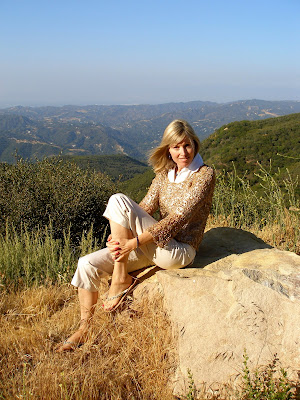 Particulars: 5 skeins Tesla (65% cotton/ 35% stainless steel) by Artfiber in San Franscisco; US 13 needles; Personal Tunic Pattern ~ details on my Ravelry page for those interested in the general construction and rough guidelines on how this is constructed.

Mr Puffy on the Importance of Relaxation

Last weekend we spent a few days in San Clemente, California. It was a little on the cool side but not too bad. I suggested to Mr Puffy that we ought to get out our boogie boards and go in the water. His response was "you're kidding, right? You know my nerves are still shot after the fire. I came down here to relax, not swim in shark infested waters." 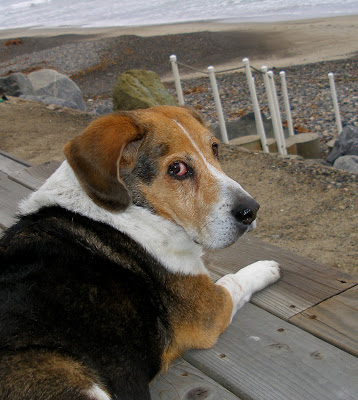 I'm beginning to think he doesn't enjoy swimming in the ocean. He's always got an excuse. To put this in perspective, it's been over a year since the fatal shark attack in nearby Solano Beach. For myself, I hardly give it any thought at all. I would be perfectly happy to splash around in the water, dangle my legs over the edge of a boogie board, allow my legs to hang deep into the ocean's dark, murky, swirling and churning water. Besides, Solano beach is a vast distance away, all of 35 miles or so.

But, in the interest of being agreeable, I deferred to Mr Puffy's wishes. We sat out on the deck, relaxed, and just read and knit, or watched for shark fins in the water. I have to say, after a couple of days spent like this, we both felt much better for it. 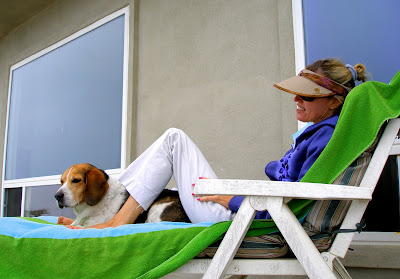 The moral to this story is we all need to listen to Mr Puffy more. No, that's not it. The moral is that less really is more! This Summer don't over do it. Plan time just to relax with a book and soak in the sun. You, too, will feel better for it. 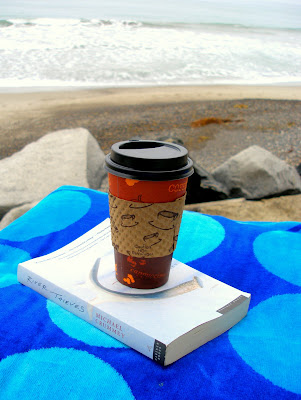 Tips for The Wildfire Evacuee

I've been traumatized! Without belaboring you with news that you have already heard, suffice it to say I was in Santa Barbara when the Jesusita Fire broke out. I had only just arrived at my parent's house an hour or so before the first of the helicopters were heard overhead. Holy cow ~ it's just over the hillside beyond Laurel Reservoir. 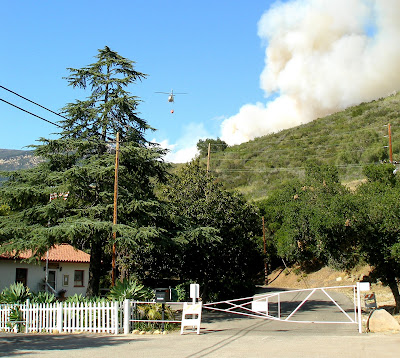 We were placed almost immediately in mandatory evacuation status and I'm going to impart a few tips that I learned on my sojourn as a wildfire evacuee.

8 Tips for the Wildfire Evacuee

As an aside, in case you haven't noticed, it's hot and dry out there. These wildfires are becoming more invasive and causing more destruction than ever before. Someone you know will likely be effected in the next few years. I hope you will take these tips seriously.

1. If you have prearranged where to meet family or friends in an emergency you need to have 2 or 3 back-up meeting places. You might find, as we did, that your initial meeting place is inaccessible due to road blocks or other unforeseen factors. This is where well laid plans start to fall apart.

2. Cell phones require power to work. If you don't have a car charger for your phone, get one. Having your phone go dead in an emergency is highly undesirable.

3. Keep a small phone book in your purse/wallet at all times. Phone numbers and addresses you think you know by heart will quite possibly desert you under periods of high stress.

4. Don't rely on TV or Radio coverage if you are in or near the disaster area. Emergency personnel are stretched thin and the news (particularly on AM radio) is outdated. Go outside and look around for yourself. Talk to people and make your own assessment of the current situation on the ground. Wildfires are dynamic and you might find that you need to relocate to a safer place.

5. Wildfires are unpredictable and can circle back to areas where you don't expect them. Burned-out area are covered with smouldering embers that can flare back to life when the wind blows. These in turn set homes on fire and can ignite any unburned brush in the area. Which reminds me, close all windows before leaving your house to prevent embers from blowing inside.

6. You need a safe place to wait it out. If you are a camping family (which we are) it's nice to have a motor home at your disposal. Know that if you opt for an evacuation center you might be there for days without much in the way of amenities. Hotels are nice, if they have room and if you can afford the rate (this cost might be reimbursable by your homeowner insurance). Although it's tempting to stay near your home you are best served by removing yourself from the danger zone.

7. At a minimum always keep plenty of bottled water in your car along with some pet food.

8. Throughout it all it's important to keep your sense of fun. You will be happy to know that on Wednesday (day 2) before things went horribly awry, I managed a quick visit to Cardigans Knit Shop and I bought some gorgeous yarn (a skein each of Debbie Bliss Cashmerino dk and Classic Elite Yarns Miracle) to knit some cute fingerless mitts for next Fall!

The following are a few of the pictures that I took during the course of the fire.

This is our first view of the fire which began approximately 1.8 miles from my parent's house. We were only mildly concerned at first. After all, it seemed small and an aerial water attack was already underway. The next morning it was quiet in the area and the fire seemed far away and well in hand. We expected to return to the house sometime that day and decided to wait for the "all clear" in Stevens Park a small local park situated in San Roque Canyon below the bridge. Merely a stone's throw from my parent's home. It seemed a very convenient place to wait. But for an odd car here or there we had the park to ourselves.

But when I went outside about 4:00 p.m. to walk Mr Puffy I looked up into the sky and saw an alarming sight. Large booming smoke clouds were quickly converging on our location. 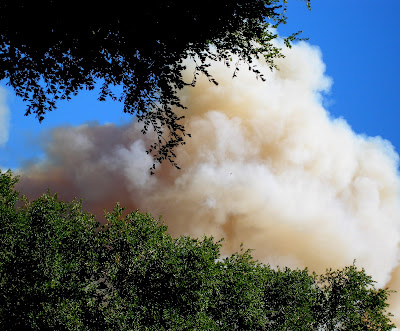 We decided to relocate to an evacuation point. The following pictures are taken in the San Roque area as we are leaving Steven's Park on Wednesday afternoon to relocate to the First Presbyterian Church (our prearranged meeting place) which, incidental, turned out to be blocked off (see Evacuee Tip No. 1 above).

At this point things became quite stressful. I quote "Last night, all hell broke loose," Santa Barbara Fire Chief Andy Dimizio said. Today "We saw the fire spread laterally across the top of the city … to almost five square miles." I believe these pictures bear out his assessment. 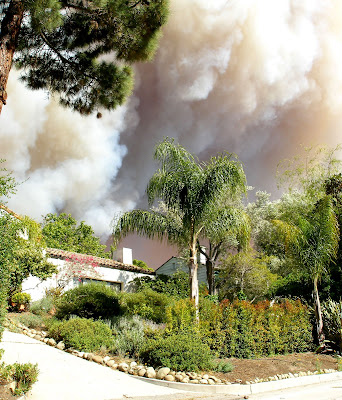 This is a home near Steven's Park in the San Roque area. 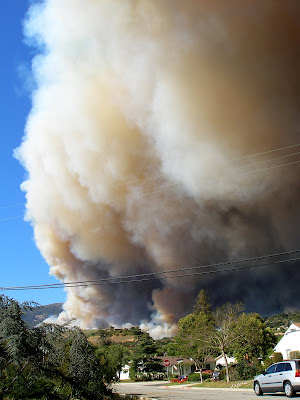 These photos are looking back at lower Santa Barbara foothills (in the San Roque area) from Peabody Elementary School. 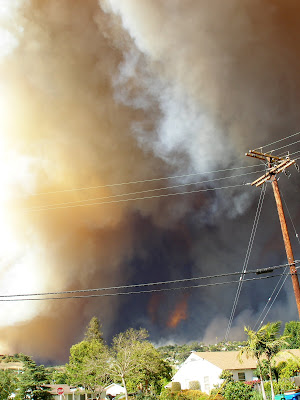 Below is a picture of La Cumbre Plaza (in the Vons parking lot) on Thursday night. The night that I was told by news crews that my parent's canyon was burning. 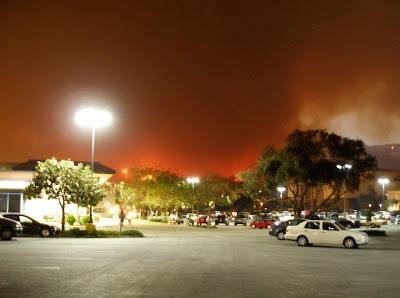 I want everyone to know that I appreciate your concern and well wishes. My parent's home miraculously survived with the intervention of the brave and courageous firefighters who lined up 10 fire engines on their street Thursday night and held the line. 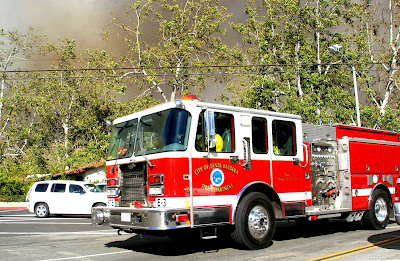 My parents are doing great and Mr Puffy was a trouper throughout. But a reminder to all how what begins as a small fire can level a city. It is time for Californians to rethink how we combats these wildfires and come up with a more innovative approach.
Posted by Mr Puffy's Knitting Blog: at 9:06 AM 29 comments: